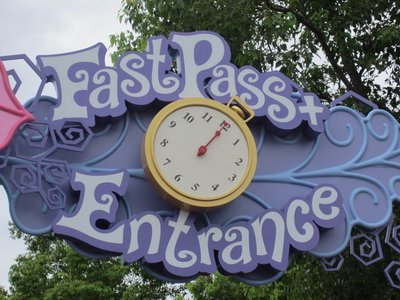 As part of the $1 billion roll out of the overall NextGen / MyMagic + initiative, Disney continues to install new signs and RFID reading posts throughout the parks.

On a recent trip I saw many additional FastPass + signs and entrances throughout the parks, especially the Magic Kingdom.

Before we take a look at all the new installations, let’s do a quick review.

There are plenty of rumors and guesses about the overall NextGen system and about FastPass +. Here are some NextGen facts we know to be true, since they were announced by Tom Staggs, the Chairman of Disney Parks:

Here are some of the rumored details about FastPass +. These are not confirmed, but many people seem to think this is what we will see:

Now that we’ve done a quick review of some facts and guesses on FastPass +, let’s take a look at some photos of new FastPass + installations around the Magic Kingdom: