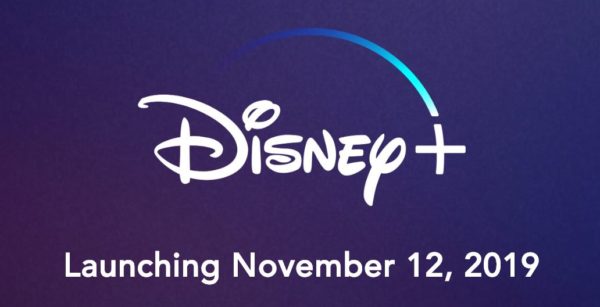 Disney just announced that their Disney+ Streaming Service will launch November 12th, 2019! Disney+ will be in direct competition with Netflix, Hulu, and Amazon Prime.

Disney has amassed quite a library over the last 100 years or so, and since acquiring Pixar, Marvel, and now 20th Century Fox, there’s even more for Disney fans to enjoy!

The service will draw content from Disney, Pixar, Marvel, Star Wars, and National Geographic. Disney+ will offer television shows, movies, and even new original content that can’t be found anywhere else. Within the first year of launch, Disney+ will introduce 25 new original series, 10 original films, and that’s just the start!

It should come as no surprise that Disney will include their entire library on their new streaming service including classics like Mary Poppins, Alice in Wonderland, Lady and the Tramp, and even newer classics like A Goofy Movie. Disney Channel’s High School Musical will also get a spinoff called High School Musical: The Musical: The Series.  (Isn’t that just one too many colons for a title?)

They’ll also be launch new content like Noelle, a holiday film featuring Anna Kendrick, Diary of a Female President, which follows a Cuban-American teenager who wants to grow up to be president of the United States of America, and Timmy Failure, who, along with his 1500 pound polar bear friend, operates a detective agency that exists only in his mind.

Star Girl will be a movie based on the New York Times best-seller, and Togo will follow the true story of a man and his sled dogs who make the treacherous trek through the Alaskan Tundra. Disney will even give you behind-the-scenes access to the making of Frozen 2 in Into the Unknown – Making Frozen 2.

One of the hottest topics is the new Monsters at Work show, which will fill in the blanks of what happens between Monsters, Inc. and Monster’s University.

Disney+ will also include every Pixar film ever created and all of Pixar’s shorts! There will even be some new “short” content like Lamp Life, which is Bo Peep’s own short and Forky Asks a Question, which is the first animated short series. Lamp Life will be available within the first year, and Forky… will launch on day one!

Disney’s acquisition of 20th Century Fox means they have access to a historical library of films and shows including 30 seasons of The Simpsons, which will be available at launch! Malcom in the Middle, The Sound of Music, and The Princess Bride will also be available… to name just a few!

Marvel is big news right now, and you can expect to see Captain Marvel at launch. A new live action series called WandaVision will allow Elizabeth Olsen as Wanda Maximoff to reprise her role as The Vision, and The Falcon and the Winter Soldier will be a new series starring Anthony Mackie and Sebastian Stan. Marvel’s What If…” will be Marvel’s first animated series, and Loki, the series starring Tom Hiddleston, will also be available.

Star Wars: The Clone Wars will be available within the first year, and the highly anticipated series, The Mandalorian, will launch day one as the first ever Star Wars series.

Nat Geo will join the Disney+ family and will offer shows including Free Solo, The World According to Jeff Goldblum, and Magic of the Animal Kingdom, which will be a new docuseries that takes viewers on a behind-the-scenes tour of Disney’s Animal Kingdom as well as Epcot’s SeaBase Aquarium, which is inside of The Seas Pavilion in Epcot’s Future World. This show will be available within the first year of the Disney+ launch.

How much will it cost?

The big question is, “how much will all this cost?”  We now have an answer.

Disney+ will be a surprisingly affordable $6.99 a month or $69.99 a year. This is less expensive than most of Disney’s competitors including Netflix, which is up to $8.99 a month.

There’s also a rumor that Disney+ could bundle with hulu to offer an even better deal.

To be notified of Disney+ news, go to the Disney+ website.