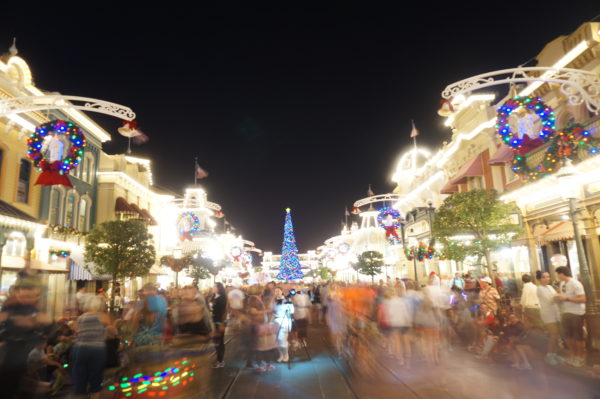 I know what you’re thinking. It’s still summertime, and not time for Halloween yet!

However, it will be soon Halloween season, and Disney plans ahead.

We’re less than a month away from the first Mickey’s Not So Scary Halloween Party, and Mickey’s Very Merry Christmas Party starts just eight days after the Halloween festivities are over.

The Frozen Holiday Wish Castle Show returns this year, and Elsa will be on hand to turn Cinderella Castle into an ice palace. Anna, Olaf, and Kristoff will also be there. The castle will be lit every night, so even if you don’t have tickets for the party, you can still see it during regular admission nights.

Also returning to Mickey’s Very Merry Christmas Party this year is Mickey’s Most Merriest Celebration Castle Stage Show, Mickey’s Once Upon a Christmastime parade, snow on Main Street USA, and complimentary cookies and cocoa. You can also look forward to rare character appearances

One of the biggest questions surrounding this year’s party was whether Holiday Wishes, the fireworks show, would return since regular season Wishes has been replaced with Happily Ever After. Disney has announced Mickey’s Not So Scary Halloween Party will include HalloWishes, so we can only assume that Holiday Wishes will also continue.

Disney hasn’t announced anything new for Mickey’s Christmas party this year, but that doesn’t mean they won’t. It’s still early!

As always, Disney has some upsell options that they call Magical Extras. For the Christmas party, they’re offering a Fireworks Holiday Dessert party at Tomorrowland Terrace in Tomorrowland.

Dessert party guests will feast their eyes and their stomachs on beautiful decorated tables and holiday themed pastries of all kinds. Cupcakes, chocolate dipped strawberries, chocolate mousse, ice cream, cheese, and fresh fruit are just a few things on the menu this year.

Tickets for Mickey’s Very Merry Christmas Party start at $84 for kids ages 3 to 9 on nights with less demand (mostly in November) and go as high as $104 for the week before Christmas. Adult tickets start at $89 and go to $109. The average price is $90 and $95, respectively.

To add the dessert party onto your Very Merry Christmas Party ticket, the cost is $79 for adults and $47 for children ages 3 to 9.

Mickey’s Very Merry Christmas Party:  Will you go this year?