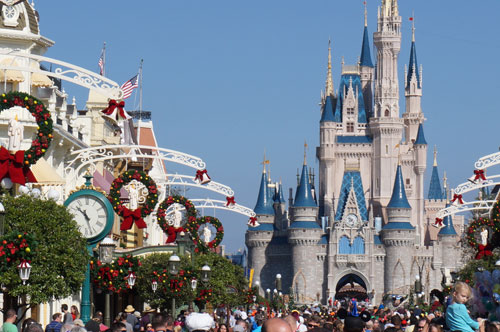 If you’ve been reading the articles I’ve written for the World of Walt for quite a while now, you probably already know that I love almost everything about the Walt Disney World Resort. I’m a former Cast Member, an annual passholder, and I earn a living helping people like you enjoy their dream vacations in all of the Disney destinations.

But, what you might not know is, I also LOVE Christmas.

So, combine my favorite place in the world with my absolute favorite time of the year, and nothing in the world could top that. There are a million reasons why, but let’s check out my ten reasons to love Disney World Christmas!

10. Christmas Mass at the Contemporary Resort

I know that before I became a Cast Member, I didn’t even know that there was any kind of Mass held anywhere on Walt Disney World property. This is a nice little perk for anyone who is staying on property but doesn’t have a car to get to a church or place of worship on Christmas morning.

The only reason this often sold-out Magic Kingdom event doesn’t appear higher on my list is because it is a hard-ticketed even (you need to purchase an extra ticket besides your park admission). Other than that, this is a phenomenal night where you can enjoy some Christmas-themed shows, Mickey’s Once Upon A Christmas parade, and more! The coolest part (at least to me) is there is a much shorter wait for the attractions that are open during the party!

From a plaque in the pavilion: “According to German tradition, the pickle brings good luck and was always the last ornament placed on the tree. On Christmas morning the first child to find the gherkin was rewarded with a little extra gift from St. Nicholas. This tradition encouraged the children to appreciate all the ornaments on the tree, rather than hurry to see what St. Nicholas had left for them.” Pretty cool, right?!

I am a huge fan of the normal background music that is constantly playing throughout the parks and resorts. I love how it fits each and every area perfectly and how it smoothly transitions as you walk from place to place. That being said, there’s nothing quite like walking down Main Street USA with the Christmas music playing!

Speaking of Main Street USA, is there a more magical, unbelievable spot than the gateway to the Magic Kingdom when it’s decorated for Christmas? I love that each and every little thing is decorated, down to the garland on the horse-drawn street car. One thing I do kind of miss, however, is the garland that used to cross Main Street, USA. I understand that the Festival of Fantasy dragon may light the whole place on fire if they were still there today, but it’s just the nostalgia in me!

5. The Gingerbread House at the Grand Floridian

As soon as Halloween is over in Walt Disney World, Christmas Trees start popping up literally everywhere! There are the perennial favorites, of course, like the enormous tree in Magic Kingdom’s Town Square, the phenomenal gigantic tree in the lobby of the Wilderness Lodge, and the equally gigantic and beautiful tree in the Jambo House lobby at Disney’s Animal Kingdom Lodge. There are trees everywhere though and each and every resort and park puts its own spin on the decorations that each tree has. If you’re in WDW and don’t have park passes one day, it’s more than worth it to resort hop just to see all of the awesome Christmas Trees!

I’ve gone on record to say that it’s about time a new fireworks display comes to the Magic Kingdom. Wishes has been around for quite a long time and as much as I have loved it over the years, I really think it time we see something new in its place. That being said, Holiday Wishes its still awesome to me each and every November through early-January!

If you haven’t seen it, it’s really hard to explain how emotional the Candlelight Processional can be for those who are really into Christmas. Imagine this: a 50+ piece orchestra playing all of the traditional Christmas music, an enormous choir, and a celebrity narrator telling the story of the first Christmas all in the American Gardens Theater in Epcot’s American Adventure Pavilion. Some past narrators have been Neil Patrick Harris, Whoopi Goldberg, Amy Grant (of “Baby Baby” fame), and Gary Sinise.

Yep, the traditional Castle Lighting Ceremony, even with all of it’s Frozen Flair, is still my favorite part about Christmas in Walt Disney World. In the latest iteration of the show, Queen Elsa uses her magical ice powers to turn Cinderella Castle into an Ice Palace, literally covering the entire building with countless white “ice” lights. She’s also joined in the show by her sister Anna, Kristoff, and everyone’s favorite snowman, Olaf. Cinderella Castle then stays lit up for the rest of the night, which is pretty amazing! I know Frozen gets a lot of flack for being featured so prominently these days in the parks, but this is a truly magical experience that you should not miss if you’re in Walt Disney World over the holidays!

Yes, Walt Disney World is a truly magical place all year long, but if you want to experience magic times a million, Christmas is a perfect time to go for you and your family!

What is your favorite thing about Christmas at Disney World?