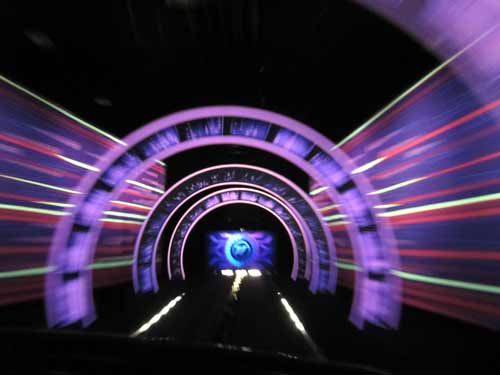 Walt Disney, both the man and his parks, and General Motors (GM) have a long history. It goes even farther back than Epcot’s opening day attraction, World of Motion. Let’s take a look at the timeline.

In the 1940s, General Motors commissioned Walt Disney and his motion picture company to create a short film on the subject of hand tool safety. The film begins by suggesting that all of the things available to society at the time, including transportation and buildings, were only possible because skilled craftsman knew how to use hand tools. The film goes on to show how to use correctly various hand tools including hammers, screwdrivers, pliers, and wrenches. Primitive Pete, an ignorant caveman, created the first hand tool: a hammer. He appears throughout the video demonstrating improper ways to use this and other tools, and then the narrator explains the proper use.

Here’s the video Disney produced upon GM’s request. It is titled The ABC of Hand Tools and was released in 1945.

In 1979, GM agreed to sponsor a ride in the Transportation Pavilion at Walt Disney World’s Epcot. The attraction was present on opening day, October 1, 1982, and it was called World of Motion. The ride was very much like the Spaceship Earth we know today in that guests would board an omnimover vehicle and tour the pavilion learning about historical achievements in transportation from the wheel to the then present day and beyond. The ride ended with an illusion that showed guests riding in vehicles of the future. When they exited the ride, they would enter an area displaying new and developing GM products.

When GM’s contract ended in 1992, they were hesitant to contract for more than a year at a time because of the down-turning economy. In 1996, World of Motion was closed, and GM agreed to continue their contract with the stipulation that a new ride focused on only their cars, specifically on Chevrolet, be created. After many set-backs and delays, Test Track finally opened in 1999. This ride ran guests through a road test. Test Track received a makeover in 2012, and reopened as Test Track Presented by Chevrolet. The newest ride allows guests to create a concept car, known as a SimCar, link it with their MagicBands, and then test their car on a series of road tests on the SimTrack. At the end of each road test, guests can see how their cars fared. Like World of Motion, riders must exit into a showroom area where Chevy cars are prominently displayed. Guests can sit in these brand new cars and even talk to GM-trained Cast Members about the cars. If you’d like your picture taken with the Chevy Volt, Corvette, or Spark, head over to the photo stations, scan your MagicBand, and pose with the car. The pictures will appear on your MagicBand with your other PhotoPass photos.

Test Track continues to be one of the most popular rides in Disney World more than 10 years after its debut.

This interactive ride has maintained popularity and continues to be one of the longest wait times in Epcot. GM has sponsored this pavilion in Future World from the very beginning.

In the Summer of 2011, a Hollywood lunch turned out to be so much more. Brad Bird (Mission Impossible: Ghost Protocol, The Incredibles, and Ratatouilli) and Damon Lindelof (Lost and uncredited screen writing for Bird’s Star Trek Into Darkness) sat opposite each other and discussed “what ifs” including “What if Walt Disney, working secretly during the 1950s and ‘60s with other geniuses of the time, had succeeded in building a wondrous city of the future- and that city still exists someplace we can’t see?” (Barnes, NewRoads). The concept for “Tomorrowland” was born.

“Tomorrowland” was briefly known as 1952. As Bird and Lindelof told the 2013 D23 crowd, they were inspired to create the movie after they discovered a box in a Walt Disney Studios storage area. The box, labeled 1952, held various WED Enterprises artifacts including a video storage disc, a comic book with a jetpack on the cover, and a photo of Walt and Amelia Earhart dated with the same year, but she is said to have disappeared in the summer of 1937.

Since its release on May 22, 2015, the movie has grossed $93 million with a third of that on opening weekend alone.

The movie starts at present day with Frank Walker, played by George Clooney, as a young boy visiting the 1964 World’s Fair. By a strange series of events including the boy-genius’s own jetpack invention, he receives a pin. It turns out that this pin is a portal to Tomorrowland. As he became an adult, Walker became disillusioned, but when he meets a teenage girl who is optimistic and enthusiastic about science, they agree to work together to once again find Tomorrowland. 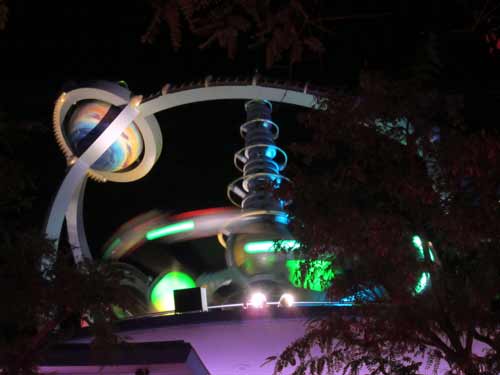 Tomorrowland is based off of the question of “what if” Walt succeeded in creating a community of tomorrow and we never knew about it.

Lindelof is quoted as saying, “What Hogwarts is to magic, Tomorrowland is to science.” And perhaps the most intriguing thing about Tomorrowland is that it is not an apocalyptic, dystopian view of the future. Instead, the future is an optimistic and very bright place to be. Lindelof and Bird faced some criticism for their movie early on with critics saying that their movie would never succeed citing that most successful movies in recent history, especially those related to science and set in the future, offered this dystopian viewpoint. Would moviegoers be satisfied with a happy future?

Obviously the answer is “yes.”

The final scenes of the movie prominently display Chevy’s next gen Volt, a family vehicle with extended electric range. The connection between Chevrolet, Disney, and this movie seems appropriate. When Walt envisioned EPCOT, an acronym for Experimental Prototype Community (or City depending on who you’re talking to) of Tomorrow, he pictured an actual city with real citizens living day to day lives. The city would have a working public library, offices, shopping districts, etc. Because of logistics, the Disney Company decided they didn’t want to take on such a huge endeavor without the guidance from Walt, who had, by this time, passed away. The Tomorrowland that the characters in the movie of the same name are looking for is a futuristic community much like what Walt pictured. After all, the whole movie is based on the “what if Walt did this and we didn’t know about it” question.

It seems that we’ve come full-circle. GM approaches Disney to create a short film. GM gets their video, and Disney extends his studio’s reach by associating with a rather large company at a time when he was trying to make a name for himself. Disney and GM partner up to create not one but two successful rides and a partnership spanning almost 40 years. Everybody wins!

So what does the future hold for Disney and Chevy? There is little doubt that the partnership will continue for Test Track in Epcot. However, Tomorrowland in Magic Kingdom has become a little outdated (which is always a problem when portraying the future). Will the 50th anniversary see a reimagined Tomorrowland? Will there be a GM connection? It’s hard to predict the future, so for now, let’s be thankful that GM and Disney wanted us to learn how to use hand tools safely.

Do you think Chevy is a good sponsor for Disney World?