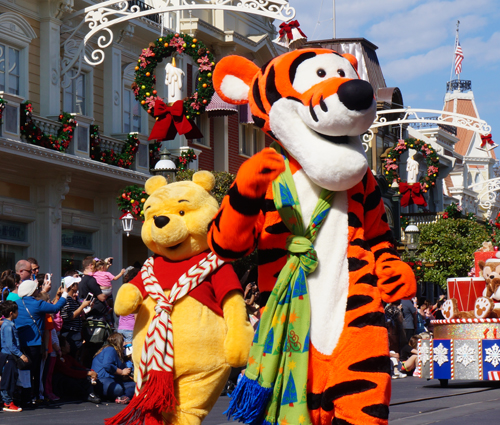 Spoiler Alert: This article could ruin Disney Magic for some readers.

When can I meet characters?

Characters’ schedules change, so check a Times Guide or ask a Cast Member when characters will be appearing. It’s important to be aware that meet and greets are subject to change and will sometimes be cancelled or moved in extreme weather conditions like rain, heat, or cold. If you don’t see the character you’re looking for at the scheduled time, ask a Cast Member if the meet and greet has been changed.

At the risk of being too general, I will say that almost every Disney Character is available for private events, but this will cost you. If you want Mickey & Minnie to appear at your birthday party, this can certainly be arranged. Are you hooked on a more obscure character? Ask your Event Planner; they can almost always make something happen as long as you have the Benjamins to back up your dream.

Sometimes, characters can be available for impromptu occasions like proposals. If your girlfriend absolutely loves Goofy, find out when he will appear by looking at a Times Guide or asking a Cast Member. When you arrive, ask the character handler if you could arrange for Goofy to be involved in your proposal. If the character is not super busy, the character handler will do his or her best to make that happen for you, but be aware of other guests and don’t hold up the line too much.

The best time for a child to meet characters depends on his or her age, personality, and vacation goals. Unscientific studies have shown that children ages three to six deem it very important to meet their favorite Disney Characters. Even if your children are older and not interested in characters or if you’re travelling with only adults, try to get a couple pictures with a character while you’re in Disney. Celebrate the magic, be a kid again, and appreciate the thing for what it is.

Guests should also be aware that lines for popular characters can get very long. As in the anecdote above, lines for Anna and Elsa had a wait-time of several hours. The wait-time will depend on the popularity and rarity of the character, the time of day, time of year, and the weather. If you know a character is appearing at a certain time and you absolutely must meet them, get there early. Some Meet and Greets have a FP+; if you can get this, it will save you some time.

Where can I meet characters?

Characters appear all over Disney’s four theme parks and sometimes at the water parks and resort hotels. Some characters like Tinkerbell have only one meeting location while others, like Mickey, have several.

Sometimes characters appear at Disney resort hotels, too. This happens mostly at Character meals in which case you have to pay to dine and meet. These meals take place in an air-conditioned environment, and guests often get to spend much more quality time with the characters. They are also specifically-themed, so you can choose which characters to spend that quality time with based on which character dining experience you choose. Deluxe Resorts may host season-appropriate characters for Christmas time. In extreme cases like park shut-downs due to hurricane warnings, Characters may be sent to the hotels to entertain guests.

How do I make the most out of my time with the characters?

First, check the Times Guide or ask a Cast Member for scheduled appearances and arrive early to avoid waiting in line for too long.

Be polite to the characters. Even fur characters are human under the mask, and a “thank you” can go a long way. Wait your turn, be ready, and be efficient. Don’t let your child run up to the character and knock them over, and avoid photo-bombing another family’s picture. Use your manners, with characters, Cast Members, and other guests, and everything will be just fine.

If you have young children, be aware of how comfortable they are with characters. Character Fear is a very real thing and can ruin a moment. Practice with characters in your hometown at places like Chuck E. Cheese. If you know your child is scared of big characters, it is easy to spot them from far away and steer your family clear of the situation. It might be safer to stick with face characters instead since they appear in human form.

If you would like to get autographs from your favorite characters, have your autograph book and a pen ready, but be aware that some characters can’t or won’t sign because of mobility limitations. For obvious reasons, Lightning McQueen does not sign autographs. Autograph books can be purchase at any Disney World gift shop for around $7-$12, or you can bring a $.99 notebook from home. Just make sure that the notebook and writing utensil are large enough for the character to grip in his or her fuzzy-glove covered hands. If you want the character to sign a t-shirt or other article of clothing, you must not be wearing it. Also, bring a sharpie or fabric marker and a clipboard or other hard-surface item to make things easier.

PhotoPass photographers are almost always available at scheduled Character Meet and Greets and are happy to use your personal camera to get a picture. Make sure your camera is on and you show them which button to push. If you want any special settings, be sure to set this first. They will also take some pictures with their Magical Disney Camera and transfer them to your Magic Band. If a PhotoPass Photographer is not available, ask a passerby to snap a picture for you. Most of the time, people will do so happily.

Giving characters a conversation hook for them to latch on to can increase the quality of your interaction as well. Asking Cinderella what size shoe she wears, Jasmine what it’s like to fly on a magic carpet, or Belle what her favorite book is will spark conversation, and they will oftentimes go into great detail.

Do you take the time to meet Disney characters in the parks?
Leave your comments below.