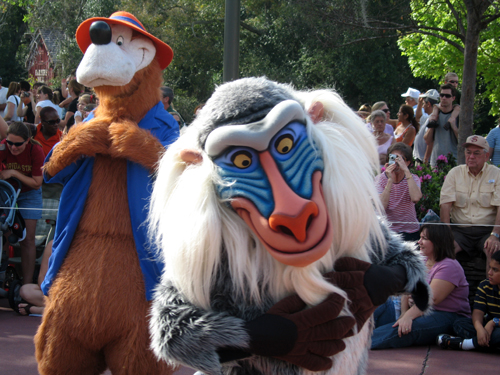 Spoiler Alert: This article could ruin Disney Magic for some readers.

A while ago I saw a situation unfold at Epcot.  It wasn’t long after Anna and Elsa arrived at Epcot. The line was huge, it was hot, and a parent, who was waiting in line with her daughters to see the Frozen royalty, was getting a bit antsy. The parent approached a Disney Cast Member and asked where else she could find Anna and Elsa with a possibly shorter line. The Cast Member answered honestly that this was the only Anna and Elsa and the only place to meet and greet them was right there in Epcot. The mother, frustrated, covered her daughters’ ears and said, “We’re both adults here. I know there is another Anna and Elsa. Tell me where they are.” Since Anna and Elsa were very new, and the Frozen craze grew faster than Disney could have predicted, there really was only one Anna and Elsa.

Who are the characters I can meet?

Over the years, several hundred characters have appeared in the Disney Parks. On any given day, guests can find a few dozen characters in any of the four theme parks and sometimes in the water parks and resorts.

Finally, Storybook characters like Alice & The Mad Hatter, Mary Poppins, and Winnie the Pooh and Friends can be found in various places in the parks.

Other characters make occasional appearances. RunDisney’s Princess 5k hosts some hunks like Tarzan and Hercules. Villains come out during Mickey’s Not So Scary Halloween Party. Star Wars characters are almost exclusively available during Star Wars Weekends, and Holiday themed characters like Santa and Mr. & Mrs. Bunny appear at appropriate times. Others are only seen in parades and stage shows.

Some characters guests will see in Disney aren’t characters at all! These include the Dapper Dans in Magic Kingdom and Streetmosphere street performers in Hollywood Studios.

If your child absolutely must meet a certain character on his or her Disney Vacation, remember that dreams do come true in Walt Disney World, but nothing is a sure thing. Never promise your child that something will happen. Instead, tell them that you’ll try to make it happen.

What are Characters and Character Meet & Greets?

A character is a live version of the animated creatures and people in Disney movies and television programs. Although these characters may be very small in film, all characters are adult human size.

There are two different kinds of characters: Fur and Face Characters. Fur Characters have an over-sized, immobile mask for their heads and include Mickey, Goofy, and Donald. Face Characters are fully human in form and appear in costumes, make-up, and wigs. These include Princesses, Peter Pan, and Mary Poppins to name a few. The major difference between the two is that face characters talk while fur characters don’t. An important and innovative exception is Mickey Mouse at the Town Square Cinema, but that is a story for another day.

Character Meet and Greets are scheduled times when characters will be available for meeting guests, signing autographs, and taking pictures. Stop by any Guest Relations or the Concierge Desk as your hotel, and ask the Cast Member to check the Character Hotline, which is only available to Cast Members, to see when and where a character is scheduled to be during your vacation.

Do you enjoy meeting Characters when visiting Disney parks?  Tips?
Leave your comments below.