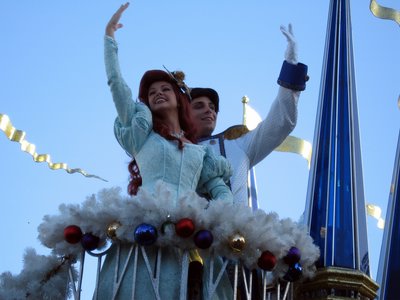 Lots of people, especially the younger set, want to go to Walt Disney World to see the characters up close and personally. Getting a hug from Mickey Mouse or seeing Ariel in person is a thrill and a memory that can last a lifetime.  Disney character dining is a way to make this happen painlessly.

Bigger Than You Think

Many children are not prepared for the size of these characters in the “real” world of Disney, as they’re used to seeing them at about three inches in height on their televisions. The characters are quite large; those in the ‘furs’ category (where the cast member is completely enclosed by the costume) are usually taller than most people, and some characters are taller still. There are also the  ‘face characters’ like Snow White, Pocahontas and Tiana who don’t wear masks, just a lot of make-up. Since it’s impossible to control which kind of character a group will encounter first, it’s a good idea to prep small children in the group for what to expect.

Character dining is an experience both kids and adults enjoy.

For one thing, at Disney parks just like others, the furs are silent (although tests are underway to change that using advanced technology and a touch of Disney magic). Effectively communicating through pantomime and gesture with practiced skill, these characters are mute so that any cast member can work behind the fur, not just one that can closely approximate the toon’s on-screen voice. For another, the extremely thick costumes that the furs wear make it hard for the cast member to see. Since this increases the chance that the cast member will accidentally step on or knock down a young adorer, staff are trained to stay very still when approached by children, not backing up or moving side to side. We’re not sure what kind of story a child would like to hear regarding the lack of animation of their favorite animated character, or why they can’t talk, or why they might not seem to notice them right away (the eye holes are again to blame). Most kids are satisfied with what their folks tell them, however, and go right on enjoying. Besides, there are always the face characters, who are in full control of their faculties.

Dining With The Characters

If your kids have their heart set on meeting a Disney character, and you don’t want to take a chance hat won’t happen – or you hate waiting in a long line, you can help to ensure an in person meeting by setting up a dining reservation for a Character Meal at a Disney World restaurant.

These Character Meal encounters, too, need to be discussed to some degree with little tykes who may be expecting to hug Mickey in the first ten seconds of a meal. One thing that sets meals with characters apart from other character encounters is the fast-paced tumultuous hubbub that typifies the three meals a day that now feature Disney characters. No one formula applies to all of the character meals; they range from buffet to strictly menu to family style. No one will be short of contact with the characters, however, as each of them make sure to come to every table in the house at least once during the meal.

Most people who visit the parks are interested in beating the crowds, so they arrive as early as possible and jet (as much as a large group can) towards their favorite destinations. Enjoying a character breakfast, longer than the typical Disney World meal (which is often rushed) will all but erase any chance the group has to hit the attractions before the huddled masses do. As with any meal, characters or not, it’s suggested to stick to the get-there-early plan of attack, hit a few of those most wanted rides or shows, and then proceed to the dining area of choice to have a relaxed, late breakfast with the characters.

In general, breakfast is the best meal served with characters. With luck, the meal will last until near lunchtime, when the rest of the crowds will be feeling peckish and begin congregating around the feeding areas. This is the perfect opportunity to hit another several rides in another area of the park. Character meals are a big blast. In other words, they are great openers or closers to a Disney World vacation.

Which Character Meal is Right For Us?

That all depends. What characters do the kids most want to see? Each character meal’s info page on Disney’s website tells just what characters will be at each meal, so parents can select which meal they want to reserve. Another thing to consider is the number of characters in relation to number of guests. In some of the character dining situations, there is a potential for a very unfavorable fur or face character-to-guest ratio. Since many people bring their kids to character meals early in their trip in order to give them an initial introduction to the characters before setting out into the park, it can be a real bummer if the characters don’t come around enough for the kids to get used to seeing them. In some cases, even when there are far too many guests to characters, it’s possible to talk to a pit boss out of earshot of the kids who will make sure the desired character makes it to the waiting tykes.

But Really, Which One is Right For Us?

To answer this question, it may be helpful to run down a couple of the more popular character meals and their attributes, which vary widely from setting to setting:

– In the Magic Kingdom, Cinderella’s Royal Table in Cinderella Castle serves three meals a day. All the characters are ‘face’ characters, which seems to correspond to the popularity of the meal. The number of characters to guests is quite favorable and the environment is clean, bright and magical.  If you child has her heart set on meeting a princess, this is a good bet.

– Garden Grove in the independently-owned Swan hotel features a character to guest ratio of almost one to two hundred, which makes little lads and lassies’ chances of face time with their favorites less of a possibility. Furthermore, the two to four characters that make appearances at the meal are all furs. The pay grade of the furs seems to have a direct relationship with the quality of the meal and setting. Garden Grove only serves breakfast on the weekends; the rest of the week it’s dinner buffet only. The choice between these two among the many options is clear; clear, too, is the fact that advance reservations are absolutely required.

– Chef Mickey’s at Disney’s Contemporary Resort features a buffet and visits with Mickey, Minnie, Pluto, Chip and Dale.  If you or a little someone in your party is looking for some time with Mickey or Minnie, this is a great option.

While no characters meetings are ever guaranteed, here is a list where you can normally find Disney characters at character meals: