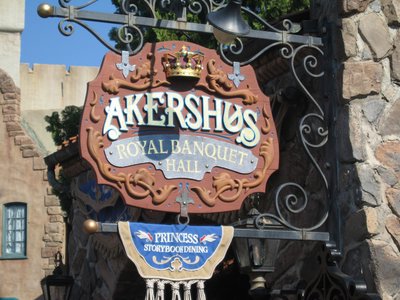 Fortunately, there are many locations throughout Disney world that offer character dining.  Here are some of the great choices available to you.

Inside The Theme Parks

Most people think of seeing Disney characters inside the Disney theme parks, and Disney delivers plenty of options to meet those expectations.

The Crystal Palace In The Magic Kingdom

Within sight of the Cinderella’s Castle is The Crystal Palace, a Victorian style building that provides Disney character dining.  Instead of princesses, the crystal palace provides characters from a Winnie The Pooh.  If you ever wanted to get a waffle shape like Mickey Mouse and also hug the huge yellow bear in the same sitting, this is your place.

Another place where you can visit Disney princesses is Akershus Royal Banquet Hall.  This restaurant with a funny name is located in the Epcot’s Norway Pavilion.  As a location or an icon, it is not quite as well known as Cinderella’s Castle, but it is also extremely popular.

The Cape May Café is located inside Disney’s Beach Club Resort.  It’s a bright and airy restaurant.  The star of the meals here is Goofy, but there is a good chance that you can also meet his pals – including Mickey Mouse in Minnie Mouse.  Disney’s Beach Club Resort is a busy place, but does not seem to have the same packed-out feel of some of the other Disney character dining locations.

While the sleek monorail glides by overhead as it passes through the Grand Concourse of Disney’s Contemporary Resort Hotel, you can enjoy a buffet style meal with Mickey and his friends at Chef Mickey’s.  Because of its prime location, and its great exposure to nearly every guest traveling to the Magic Kingdom on the monorail, this is one of the most popular character dining locations.

The Hoop-Dee-Doo Musical Revue is just what you would imagine – good country cooking that includes all the fried chicken and barbeque ribs you can eat, together with a corny but fun show.  You will enjoy desert time when everyone twirls their checkered red and white napkins in the air.  The show takes place in Disney’s Fort Wilderness Resort and has been a long time favorite of many families.  Please note that no classic Disney characters show up at this meal – you just get some very talented human performers.

If you like the idea of country – western music and down home cooking, but you still would like to meet Mickey Mouse, then Mickey’s Backyard BBQ is a terrific choice.  There is a fun show that includes country music as well as line dancing.  And of course, an opportunity to visit The Big Cheese.

All of the Disney character dining experiences are packed full for most every meal.  Reservations for breakfast, lunch, and dinner open 180 days in advance.  Mark your calendar and call precisely 180 days before you would like to have your reservation.  It sounds a bit overboard, but it is absolutely necessary.

No matter which Disney character dining location you select, you can be assured you will have a good meal and some great memories where the whole family has an opportunity to interact with some of the most beloved Disney characters.