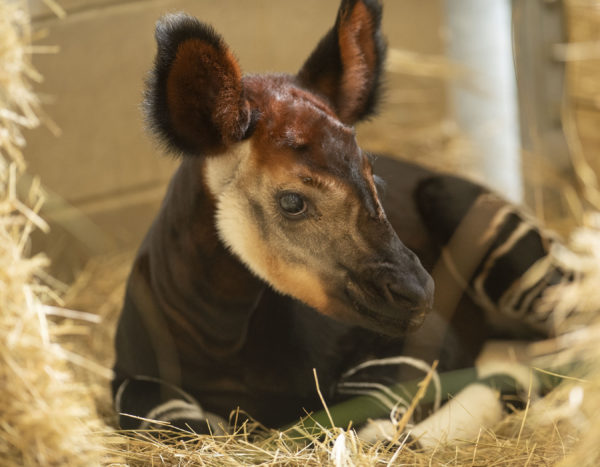 Disney announced on World Okapi Day that they have welcomed a new baby Okapi to the family!

The baby Okapi, whose name hasn’t been released, was born on October 1st, 2018 to Mother Zelda and Father Mandazi who were chosen to breed through Disney’s Species Survival Plan (SSP), which is Disney’s partnership with the Association of Zoos and Aquariums with the goal of helping to repopulate threatened and endangered species.

The bouncing baby boy was 54 pounds at birth and took just one hour to stand and move around. He is a welcome addition to the just 20,000 Okapi left in the world as the breed suffers population loss due to poaching and habitat loss from commercial logging and mining, which guests can learn all about during Kali River Rapids in Disney’s Animal Kingdom! Okapis, who have a distinct look with brown bodies, striped legs, and large (very cute!) tufted ears, may look like a zebra, but they’re actually related to Giraffes.

Okapi, which are native to the rainforests of the Dominican Republic are often called “ghosts of the forest” because they are reclusive and rarely encountered in the wild. Nevertheless, they are endangered.

The baby Okapi, which was born at Disney’s Animal Kingdom Lodge, won’t have to worry about poachers or losing his habitat. The lodge has prepared a backstage area for him where he will stay for several months to bond with his mother and nurse before joining his herd on the savanna. While he’s backstage and even after he is release onto the savanna, he will be closely monitored to ensure that he meets developmental milestones appropriate for the species. Okapi mothers like to “tuck away” their young until they get older, so this is a pretty natural setting for him to be in right now.