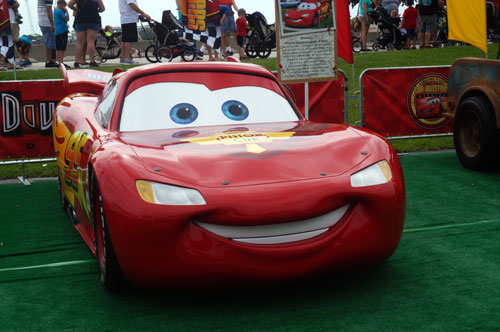 If you like cars, or even if you have ever just been in a car, you might want to check out the Disney Car Masters Weekend.

I’ve been to a few car shows. To me it seemed like an event for guys who spent a lot of time restoring their beloved vehicles in the garage to stand in public and show off their work as they occasionally wiped off fingerprints from people who wanted to get a too-close look.

In a nutshell, it’s interesting, but unless you are a true car enthusiast, it isn’t that interesting.

I thought the Car Masters Weekend at Disney Springs might be the same. I should have known better. After all, if Disney does something, they do it right, and make it interesting for everyone in the family.

Let’s take a look at some of the events that took place in 2014:

It probably wouldn’t be a proper weekend with the word “car” in the title if there wasn’t a car show. There were more than 100 exotic (i.e. crazy expensive), classic (i.e. old), and muscle (i.e. fast) cars on display. They are fun to see even if you are perfectly happy driving your cute little Honda at home.

Disney offered plenty of “meet and greet” opportunities with Disney car characters, if you can indeed meet a car that just sits there. This included Tow Mater and Lightning McQueen from the Disney Pixar Cars movies.

There were also celebrities from the automotive world who made appearances and gave autographs.

While some folks don’t like how Disney puts sponsors front and center in the parks (hello Starbucks controversy), the fact of the matter is that sponsors have always been a part of Disney’s parks since Disneyland opened in 1955. This event was no exception.

Chevrolet, which currently and prominently sponsors Test Track in Epcot, made a big appearance with displays of the Corvette Stingray Coupe and Chevy Volt. I guess if I had an extra boatload of money laying around that I didn’t know what to do with, I wouldn’t mind picking up a new ride like the Corvette. Wow.

While cars were understandably the main focus of the event, there were some other interesting events taking place too.

Disney offered a chance to play the Infinity 2.0 video game.

Disney offered special event merchandise, and the Disney Food Trucks were on hand to feed the crowds.

Disney showed off some car-themed topiaries, which I believe have also made appearances as part of the Epcot Flower and Garden Festival.

Something that took place and doesn’t seem car-related at all were demonstrations by Duncan Yo-Yo Champions and Professionals. Did you even know that there was such a thing as a Yo-Yo Professional? Yup, it’s true.

On top of all that, the AMC 24 Theater was showing an all-day “Cars” and “Cars 2″ movie marathon.