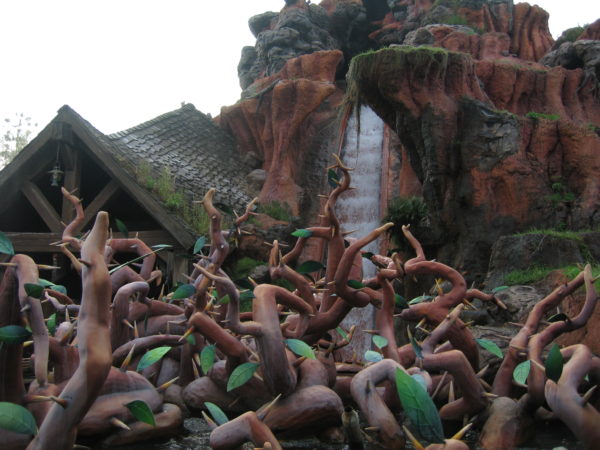 Thorny patch with water drop behind in Splash Mountain

Disney has filed a patent for what they call a Capturepult system. What does that mean?

Currently, boats back up on water rides because it takes time for them to accelerate to the speed of the water. This acceleration time slows down the ride and eventually backs up boats on both ends of the flume especially when the parks are the busiest.

The new Capturepult patent, at least theoretically, solves this problem.

The Capturepult replaces the current system for stopping and starting boats by actually stopping them – instead of letting them bump into each other – and then launching them again so that they quickly reach traveling speed.

The mechanism attaches to the side of the flume and “captures” the boat to unload and “catapults” it when it is loaded.

While Disney hasn’t said what rides the Capturepult could be used on, some of the most useful applications would be Frozen Ever After, It’s A Small World, Pirates Of The Caribbean, and obviously Splash Mountain.

Where should Disney install a Catapult boat launch?