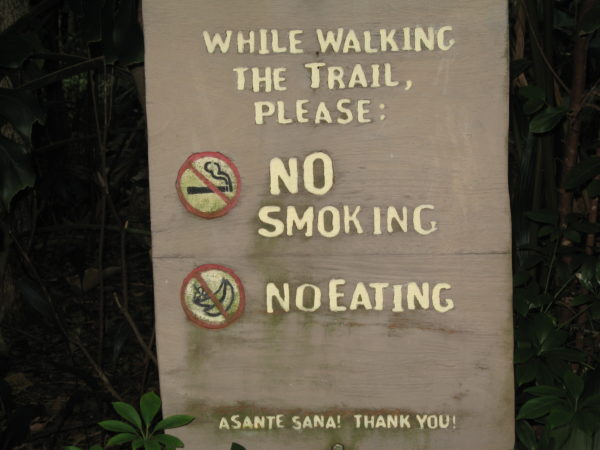 While walking the train, please no smoking and no eating - sign at Pangani Forest Exploration Trail

The big news out of Disney World and Disneyland is that they are reducing their stroller size limits. This effects mostly large jogging strollers and double strollers, which can take up a lot of valuable space in the parks.

However, there are other new policies that could also affect your vacation plans.

Disney has banned both dry and loose ice, as well as smoking in the parks.

Besides the banning of strollers staring May 1st, Disney will also eliminate smoking areas from all of the theme parks, Disney World water parks, ESPN Wide World Of Sports, and Downtown Disney in Disneyland. The designated smoking areas inside these areas will be removed.

Smoking will still be permitted outside of the parks, at Disney resort hotels, and at Disney Springs in designated areas.

Unlike the stroller and smoking policies, the “no ice” policy goes into effect immediately. Disney recommends reusable ice packs to keep coolers cool. However, many Disney Resort Hotels do not have the adequate freezers to freeze ice packs with the exception of Deluxe Villa Resorts, which have a full-size refrigerator and freezer. Disney says that they will provide complimentary cups of ice once you’re inside the parks at quick-service restaurants.

This new rule is a little confusing. It’s not clear why Disney has instituted this policy, but some have suspected that it is a safety and/or security issue considering that it is an immediate change and that they’re still offering ice once guests go through security checks.

No Smoking, No Ice: Good moves by Disney?