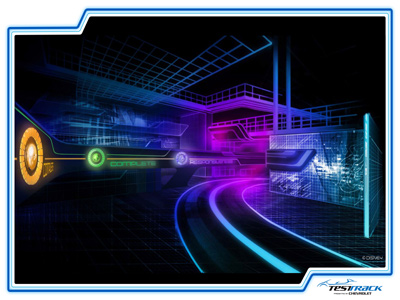 Disney has announced that the new and improved version of the Test Track attraction in the Future World section of Epcot will open on December 6, 2012 – which just happens to be the same day that the new section of Fantasyland will open in the Magic Kingdom. Seems that will be an exciting day for Disney fans everywhere.

Disney closed Test Track back on April 15, 2012 and has just now announced when it would reopen. The new attraction will take you into a Design Studio where you can design you own car. Designs can be done as individuals or as a group. The studio will also showcase sketches and models that have never been seen by the general public.

After the design is complete, you can then get into a physical ride vehicle and take the design for a test drive.

The actual layout of the track is reported to be unchanged – with hills, turns, and a high speed loop outside the ride building. During the ride, you will see ratings on your car’s design in the area of responsiveness (maneuverability), capability (rough road and weather handling), efficiency (environmental impact), and speed (you know, how fast you can go).

A new musical soundtrack, including sound effects, will be part of the experience.

The FastPass and single rider lines will also remain.

The new post-show area will allow you to check the performance of the car you designed and drove. There will be a chance to create your own custom television commercial. You will also be able to see Chevy production and concept cars.