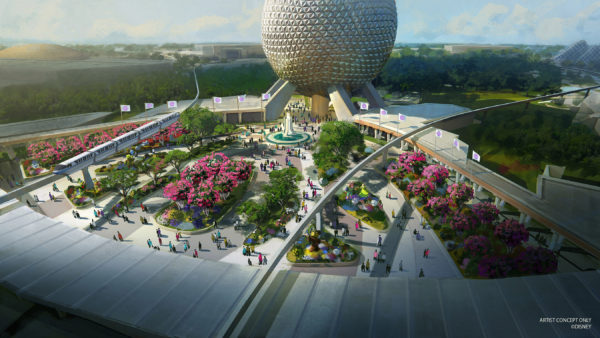 In this artist rendering, a new entrance plaza in development at Epcot will greet guests with new pathways, sweeping green spaces and a reimagined fountain. This design will pay homage to the original park entrance with fresh takes on classic elements. (Disney)

Epcot holds a special place in the hearts of many Disney fans. It was Walt’s last dream, which he never saw to fruition, and it is truly art imitating life.

When Epcot opened in 1982, it was revolutionary. The problem was, this experimental community didn’t stay revolutionary for long. Technology, Science, Engineering, and Life were moving at such a fast pace that the park quickly became outdated. The vision of real-world companies sponsoring pavilions in Future World and countries sponsoring pavilions in World Showcase was never fully realized, and even those companies that did sponsor found themselves on hard times and decided to pull their sponsorships.

But Disney has a dream, and as Walt said, his parks will never be complete “as long as there is Imagination left in the world.” Work will begin on Epcot in the very near future, though no exact date has been given, and everything is expected to be completed in time for the big Walt Disney World 50th anniversary celebration in 2021!

Let’s take a look at the changes Disney announced for Epcot!

You’ll notice the changes before even entering the park!

The current Leave a Legacy monoliths that sit at the foot of Spaceship Earth will be removed, and the photos will be moved outside the park.

Upon entering the park, you will be treated to a visual indulgence with a brand new plaza design that pays homage to the original. There will be a new fountain design, fresh pathways, and plenty of green space. The classic look will be modernized in a way that celebrates the original vision for Epcot.

Epcot will boast a first-of-its-kind play pavilion with fun, interactive, and innovate activities in which kids and families can encounter Disney characters in an entirely new way! The former Wonders of Life, which has recently been used as a Festival Center for all four of Epcot’s festivals, will transform into this exciting new play center.

Disney had already announced some improvements.