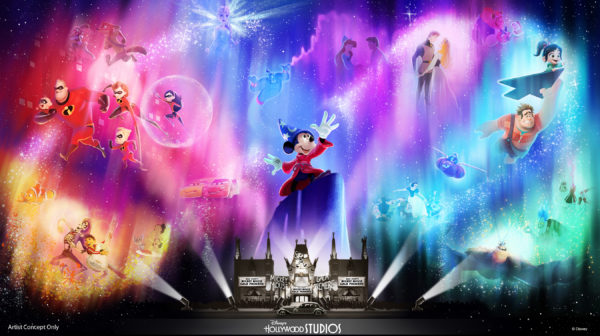 Wonderful World of Animation – a new nighttime spectacular coming to Disney’s Hollywood Studios in May 2019 – will use state-of-the-art technology to take guests on a magical journey through more than 90 years of Disney animation. (Disney)

Let’s take a look at what we can expect!

Star Wars: Galaxy’s Edge is set to open in Fall 2019, and Chapek announced the official names for two new attractions that will be part of this new land in Disney’s Hollywood Studios.

First, Millennium Falcon: Smugglers Run will allow guests to take the controls of one of three critical roles aboard the most famous starship in the galaxy.

Star Wars: Rise of the Resistance is the second attraction, and it will put guests in the middle of an epic battle between the First Order and the Resistance. You’ll even get to face off with Kylo Ren!

Both of these attractions will have optional interactive integration with the Play Disney Parks app. The land will also feature impressive background music from Oscar-winning composer John Williams.

Finally, in Star Wars news, we’re finding out that the Star Wars-themed resort, which is yet to be named, will be even more immersive than we could have imagined. When you arrive for your multi-day adventure aboard the luxury starship, you’ll first board a launch pod that will “transport” you to the ship. Once aboard, you’ll enjoy space-view cabins, dining, and an overall incredible experience that is beyond compare.

River Country closed, officially, in 2001, and the property adjacent to Disney’s Wilderness Lodge has sat vacant since then. The old watering hole paled in comparison to the massive, sophisticated water parks of the 21st century, so it was left to rot away.

But that’s all about to change. What was previously just speculation is now official!

The property that used to be River Country will soon become the construction site of Disney’s newest Deluxe Resort Hotel. It will be called Reflections – A Disney Lakeside Lodge, and will play off of its surroundings with a natural theme. Not only is the property perfectly suited for this theme, but the hotels that sandwich the new hotel, Disney’s Fort Wilderness Resort and Disney’s Wilderness Lodge Resort, will also contribute to the theming.

Reflections will reportedly have 900 hotel rooms and could even expand the Disney Vacation Club accommodation options.

There is no opening date for this hotel, but with Disney World’s 50th anniversary coming up in 2021, it would not be surprising for this to be added to the list of “magical enhancements”.

Disney had already confirmed that IllumiNations would be replaced, and while we don’t know the official name for the new show, we do know that Epcot will get a new nighttime spectacular in 2020 as part of a “multi-year transformation of the park.”

If you’re a fan of Disney music, this is the show for you! The new show will celebrate how Disney music has inspired people around the world. Much like IllumiNations, the new show will feature massive, floating set pieces in World Showcase Lagoon, lights, fireworks, and lasers. Epcot will also add custom-built LED panels plus choreographed moving fountains.

But if Disney plans to end IllumiNations in the summer of 2019 and the replacement won’t debut until 2020, what will fill the void? Actually, there will be a limited time experience called Epcot Forever from the second half of 2019 to 2020 when the new show is revealed. Epcot Forever will feature classic Epcot music, so this show is a must see for real Epcot fans!

Epcot’s World Showcase is a favorite for many Disney fans. There’s no where else in the world where you can visit Mexico in the morning and Japan in the afternoon. I suspect one thing that people really love about World Showcase is that it’s the least Disney-fied area in all of Disney World.

This, too, is about to change. It started when Frozen Ever After replaced Maelstrom in the Norway pavilion. While this wasn’t unwelcomed by the Norwegian people, who argued that Maelstrom had become outdated and misrepresentative, some World Showcase fans were a little upset that Disney was putting their intellectual property into the area. The next IP to invade World Showcase will be in the form of a very tiny, yet very talented mouse. Remy’s Ratatouille Adventure will, officially be joining the France pavilion. This comes as no surprise to Disney fans who have suspected its construction for quite some time now.

France will also get a brand new Beauty and the Beast sing along show created by Don Hahn who produced animated and live action versions of the film.

Celebrate Mickey’s Birthday and Beyond

Disney World, after all, was started by a mouse, but we don’t see much of him in his own house. Disney is ramping up their Mickey representation just in time for Mickey’s 90th birthday!

The Wonderful World of Animation will be an all new cinematic experience taking place nightly in Disney’s Hollywood Studios at the Chinese Theater starting in May 2019. This show will celebrate not only the park’s 30th anniversary but also 90 years of Disney animation starting with Mickey.

Mickey & Minnie’s Runaway Railway will also join The Studios very soon. The new ride, which will use breakthrough technology to transform a 3D image into 2D but bring the 2D image to life, will be the first ever ride through attraction with a Mickey theme. The original story and loveable theme song will be based on Disney Channel’s Emmy Award winning cartoon shorts featuring everyone’s favorite mouse.

It wouldn’t be a birthday without a celebration, and Minnie has quite the celebration planned! From January 18th through September 30th, 2019, join Mickey, Minnie, and all of their friends in Magic Kingdom on the Cinderella Castle stage for Mickey & Minnie’s Surprise Celebration! A version of the high-energy show will also be performed in the form of a deck party aboard the Disney Cruise Line ships.

What announcement are you most excited about?