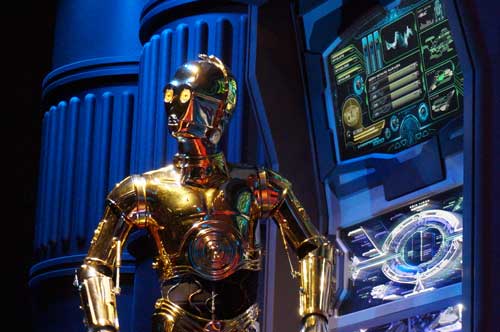 Disney Animatronics Who’d Be Hard To Shop For

It’s that time of the year again: there’s peppermint in your favorite coffee, there are lights going up all over your neighborhood, and you can’t turn on the radio without hearing “I want a Hippopotamus for Christmas”.

And even though it might feel like the department stores and malls started decking their halls in July, now is the time (now is the best time) to start thinking of what you are going to buy that special someone on your Christmas gift list.

But what if that special someone isn’t a someone at all? What if this year, you took it upon yourself to brighten up a Disney Audio Animatronic character’s holiday by buying them something special? They work just as hard all year as anyone else you may know! Think about it, these characters are in operation for 365 days each year and never get the attention and appreciation that they deserve, especially around the holidays. But what would you buy them if you could?

Here’s a list of Disney animatronics who’d be hard to shop For.

The Yeti from Expedition Everest

As the centerpiece of the Legend of the Forbidden Mountain, the Yeti doesn’t seem like he’d be the kind of guy who’d be easy to buy a present for. It’s not like you can stop by The Gap and get him a Christmas sweater or something. What size would he even be? I don’t have enough room in this article to type the number of X’s it would take to get his size down accurately. If it were me, I’d stop by Bath & Body Works and get him a nice-smelling, manly collection of soaps and lotions so he could clean himself up a little bit. Then again, that may make him a little upset (sure, he’s not clean and kind of smells, but I don’t want to hurt his feelings) and I don’t think he’s the type of guy whose bad side you’d want to be on. I feel kind of bad, but it looks like the Yeti may again be going gift-less this Christmas.

Carlos from Pirates of the Caribbean

Ahh, poor Carlos! The mayor of the Spanish town being sacked by rowdy pirates has been getting dunked in that well for decades. To make matters worse, his wife is screaming at him from an open window, “Carlos, don’t be cheek-in!” (which translates to “chicken” if you don’t speak crazy lady!) I wouldn’t even know where to start with getting a Christmas gift for this unlucky government official. Do you buy him earplugs so he finally won’t have to listen to his wife making him feel like less of a man after all these years? Or maybe you should buy him some scuba gear so he doesn’t have to keep taking in all of that well water? I would think a pocket knife would be good, then he could cut the ropes he’s tied up with and try to escape, but with all of the pirates (and swords) around that may be a lost cause! It looks like Mayor Carlos will be stuck again without any relief this holiday season!

While all of the other monks around him are doing their jobs, painstakingly reproducing Biblical manuscripts, our tired friend is snoring away, unaware that millions of guests have passed right by him and witnessed his slip-up for years. My first instinct would be to buy him some NoDoz to get him up and moving again, but I’m sure he’s not used to having caffeine and I don’t want him getting too riled up where he’d actually say a word and break his sworn code of silence. I don’t want to be the one responsible for getting this guy kicked out of the monastery, do you? Maybe you could buy him a box of toothpicks so he could prop his eyes open like characters did in those old cartoons, but then you’d risk him getting a piece of one of those in his eye and I’m sure he doesn’t have great medical coverage with it being hundreds of years ago and all. Unfortunately for this pooped padre, he looks like he’l be sleeping right on through the holidays again this year.

In addition to being one of the most recognizable and loved robots in the history of our galaxy, C-3PO is also the unwilling pilot of the Star Tours ride vehicle, the Starspeeder 1000. To be completely honest here, C-3PO needs to stick to his day job as a protocol droid because he makes for a terrible pilot. You may be thinking, “Well, then this one is easy, just get him flying lessons for Christmas” and that’s where your first mistake would be. As a translator, C-3PO is nervous, neurotic, and unsure. Would you want that kind of character flying your Starspeeder? I sure wouldn’t. You can run down the list of usual Christmas presents and none of them would work. Clothes? Nope, he’s a robot and doesn’t need them. Books? You can’t get him any because he already knows everything that’s in them (and he’s a little braggadocious about it, too!). Fruitcake? He doesn’t eat. Sorry C-3PO, looks like the only thing under your tree this year is going to be your faithful friend R2-D2.

So if you think your family and friends are hard people to shop for, just imagine having to shop for some of these arguably impossible Audio Animatronics. I don’t know about you, but I’ll be happy to hand out a few gift cards on Christmas morning and let Santa do the rest!

Thank you for reading this silly list and I hope you and everyone you care about has a very happy holiday season!

Which Disney animatronic do you think would be hard to shop for?