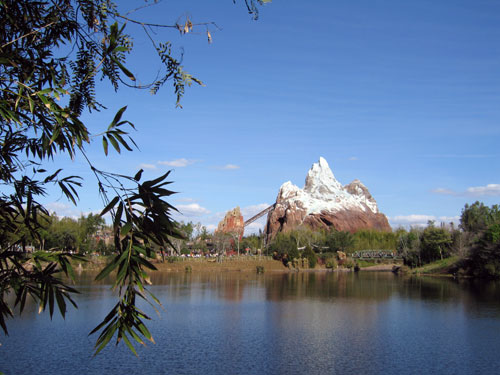 Disney’s Animal Kingdom – The World Outside of Pandora

Disney’s Animal Kingdom is one of the most unique theme parks I’ve ever visited. It’s half theme park with rides, shows, and attractions, and half animal habitat (don’t call it a zoo!) with incredible animal encounters.

With the recent opening of Pandora, everyone understandably seems focused on the new land.  However, there is still a lot to see and do in the rest of the park – especially if you don’t want to wait for hours to ride a banshee or take a river journey.

Let’s look at what the rest of Animal Kingdom has to offer.

Fewer Attractions, But Lots To Do

Although Animal Kingdom has fewer attractions than the other Disney theme parks, it still has a lot to brag about. For example, all of Magic Kingdom could fit into just the Kilimanjaro Safaris attraction of Animal Kingdom. It is also a lot like Epcot‘s World Showcase in that it provides a fun but relaxing atmosphere for an easy day in the parks.

Kilimanjaro Safaris is one of the best attractions in Disney World. Its bumpy ride provides a bit of a thrill and the dozens of animals provide the entertainment. The drivers are very knowledgeable, so feel free to ask questions along the way.

Wait times are the shortest in the morning and evening, which often is when the animals are most active. It’s best to ride at these times when you might even be able to walk on. Regardless of when you’re riding, this is a good use of a FastPass+ reservation. For the most beautiful view, find out what time sunset is and try to ride at this time. Your pictures will be amazing!

Remember when I said that Animal Kingdom is a unique mix of theme park and animal habitat? Here is the prime example. From Kilimanjaro Safaris to Expedition Everest, guests get a variety of experiences.

Expedition Everest is an exciting rollercoaster attraction with a 44″ height minimum. It careens forward to a broken track then flies backwards and encounters a Yeti. Although the Yeti doesn’t work anymore, it is covered in strobe lights to simulate movement, and the lack thereof doesn’t affect the greatness of this ride.

As is true with most attractions in Disney World, the lines are shortest in the morning. Also, if you don’t mind possibly being separated from your traveling companions, consider using the single rider line, which is usually less than a 10-minute wait.

With Animal Kingdom being open late into the evening, this is an especially fun attraction to visit at night. The darkness adds to the suspense of the broken track, and the strobe lighting is also more pronounced.

Kali River Rapids is a white-water rafting ride in which a large, spinning raft floats through rainforest ruins. As is true with most of Animal Kingdom, the message behind the attraction is conservation.

Regardless of the serious message, the attraction is fun, and it’s very likely that you’ll get wet or even soaked on your ride through the rainforest. As such, I would suggest bringing a change of clothes or at the very least a swimsuit or clothes that will dry quickly. For your convenience, Disney provides free lockers nearby in which you can store your valuables (namely your cell phone), your bags, and dry clothes. They also sell ponchos or you can bring your own.

The FastPass on this ride is pretty necessary. First, the wait times can get long. Second, The FP+ allows you to schedule your ride at a convenient time. An end-of-the-day FP+ means you can head right back to your resort to dry off while a mid-day ride means you’ll be hitting it at the warmest part of the day when you might not mind being wet.

Dinosaur in Dinoland USA is a high-speed ride through time during which your goal is to capture and bring back an Iguanadon to save it from extinction. There are many dark scenes and plenty of chances to see audio-animatronic dinosaurs during your ride. You’ll have some close encounters; even if your little ones meet the 40″ height requirement, make sure they’re ready for something a little loud and scary.

Dinosaur is good for a FastPass especially if you’re planning to skip Kali River Rapids for whatever reason, but the wait is never too long, and the preshow is entertaining.

Primeval Whirl is part of Chester and Hester’s DinoRama. This area is often misunderstood and labeled as a misplaced, cheap carnival attraction that Disney used to fill space. It’s much more than that though if you know the backstory.

Regardless of your personal thoughts on DinoRama, it’s still part of the attractions in Animal Kingdom, so it makes my list.

This wild mouse ride can be a bit too much for those with motion issues, but for the rest, it’s a wild ride with some nostalgia.

Tricertop Spin is another attraction in DinoRama. It’s basically a Dumbo the Flying Elephant with triceratop dinosaurs. It also gives riders a nice view of DinoRama and DinoLand USA.

This lively stage show features acrobats, singers, and performers dressed in tribal costumes of vibrant colors. Its new location in Africa (it used to be in Camp Minnie-Mickey) feels more appropriate and more permanent for a show that has been delighting audiences for nearly 20 years.

Although this show does offer a FastPass, you really don’t need it unless your seating location is important to you. Regardless of where you sit, you’ll have a good view.

This shortened version of the Finding Nemo movie, is an excellent presentation of both live actors and puppets. In fact, sometimes it’s hard to tell who or what is the focus since they’re both wonderful.

This stage show also has a FastPass, but it’s a very large theater that holds a lot of people. Again, unless your seating location is important, you can skip the FastPass.

I had a hard time deciding whether Flights of Wonder was a show or an animal encounter because it really blurs the lines. It’s essentially a bird stunt show in which the intelligence of birds is showcased with a mix of comedy from the actors. It has a strong conservationist message, and the outdoor amphitheater provides an excellent backdrop for the show and the message.

It’s Tough to be a Bug

It’s Tough to be a Bug is a 4D theater show in which bugs tout their own benefits. Basically the message is, “Don’t kill us; we do good things.” It’s an excellent example of how Disney can take something education and disguise it as fun and entertaining. The kids (and the adults) won’t even realize they’re actually learning something!

Although I really enjoy this show, I have several friends and parents who don’t like it. They claim that it is too stimulating and at times too scary. The seats have special “interactive elements” that simulate bugs crawling under you, arms reaching out and grabbing you, and even bugs spitting at you. There is also a point where a stinkbug stinks. If you have any kind of sensory issues, or have little ones that do, this might not be the attraction for you.

The Tree of Life has long been Animal Kingdom’s icon, but you’ve never seen it like this before! It is literally in a whole new light!

Throughout the evening hours (once it’s dark), guests can experience amazing projection shows on the Tree of Life. There are animals, Disney characters, and well-known Disney songs in this approximately five-minute show. It’s not something for which you can plan since it isn’t scheduled, but if you’re wandering around at all especially in the Discovery Island Carnivale area, you’ll have a pretty good view of the show.

This self-guided walking trail takes guests on a journey through Asia with elaborately themed areas including a ruined temple that is “thousands” of years old. You’ll encounter birds, bats, tigers, and more – all up close. I’m always amazed at how close I can actually get to a live tiger!

There are also very knowledgeable Cast Members here who are ready and willing to answer your questions.

Formerly Pangani Forest, this is also a wildlife walking trail on which you’ll encounter Gorillas and hippos that swim underwater! The Cast Members stationed at certain areas throughout the trail really know their stuff and can answer any of your questions. Don’t forget to stop by and see the Meerkats. They’re quite entertaining!

Rafiki’s Planet Watch is an area of the park more than an attraction, but we’ll treat it as one entity since it is its own place.

You’ll board the Wildlife Express Train and head to the area with an Affection Section and Habitat! Habitat!

Affection Section is basically a petting zoo, but the area is laid out well, and kids of all ages will love this section. My favorite animal is the giant pig who always seems to be laying against the fence. He’s so docile that you can get very close to him, pet him, and even pose for a picture. There are also cows, goats, sheep, and more.

Inside, you’ll find character meet and greets, snakes, and other small creatures. Perhaps the biggest attraction is the live surgery and procedure room. Guests can stand outside and watch the veterinarians perform procedures on the animals that live in the parks. They do a variety of things from teeth cleanings to removal of various annoyances to major surgeries. It’s quite the experience to see a large cat asleep on the table while the vets care for him. You just might find that you have a budding vet, zoologist, or animal lover!

Habitat Habit! teaches guests about conservation and how you can make a difference in your own home and town. You can learn how to grow a garden, how to attract butterflies, and many other things. These Cast Members are trained professionals who know what they’re talking about, so feel free to ask questions and interact as much as you want.

It wouldn’t be Disney without some character meet and greets, and this is a great place for it. Animal Kingdom has some unique characters that can’t be found in the other parks. You’ll notice a lack of Disney Princesses, but you can meet Baloo and Louie from the Jungle Book, Minnie and Mickey, Goofy, Pluto, Pocahontas, Flick, Rafiki, Russel and Dug, and Chip and Dale among others including Tarzan, who can often be found in Rafiki’s Planet Watch.

DiVine is a street performer usually located in the Oasis area of Animal Kingdom. She is completely camouflaged, and you might not even notice her until she moves. If you find her, watch for a bit. She’s very talented and entertaining. She’ll even pose for pictures.

Burudika, which means “to be refreshed” performs Afro-pop hits in Africa, and Chakranadi performs Indian-inspired instrumentals in Anandapur. Both of these performers will often call on people from the audience to participate.

There are also a couple play areas in Animal Kingdom including DinoLand’s The Boneyard. This is a great place for the kids to burn some energy while the parents relax in the shade. Don’t worry- there are plenty of Cast Members stationed throughout the area to watch for safety and help lost kids find their parents after they’ve been all turned around on the slides.

Are you a fan of Disney’s Animal Kingdom – all the stuff aside from Pandora?