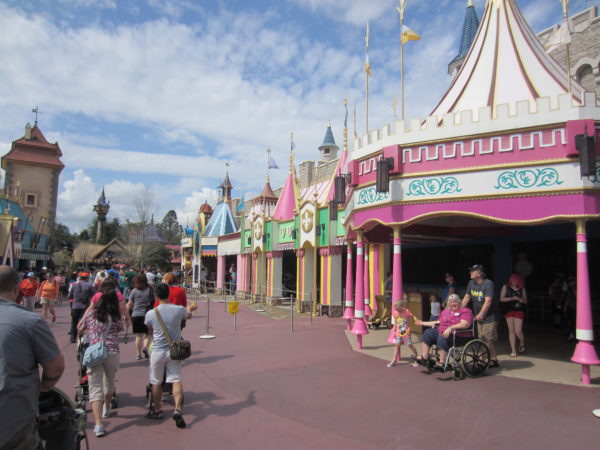 Fantasyland midway near its a small world

Disney recently added a new hard-ticket offering called Early Morning Magic. This event allows guests to access a park before regular park hours and is different from Extra Magic Hours because they are not limited to just guests of the Disney resort hotels. Anyone can attend, but there is a fee whereas Extra Magic Hours are included with park admission.

I recently attended the Early Morning Magic event at Disney’s Hollywood Studios‘ new Toy Story Land; here’s my review and a video of my experience!

Disney also offers Early Morning Magic in the Magic Kingdom. During this event, guests have access to some of the best attractions in the park. Until now, guests could only visit three attractions including Peter Pan’s Flight, Seven Dwarfs Mine Train, and The Many Adventures of Winnie the Pooh.

Now, Disney added four more attractions for a total of seven of the most popular attractions all in Fantasyland: Princess Fairytale Hall, it’s a small world, Mad Tea Party, and Under the Sea – Journey of the Little Mermaid.

Early Morning Magic takes place on select Tuesdays and Sundays in Magic Kingdom from 7:45 to 9am, and it costs $79 for adults and $69 for kids plus regular park admission.

After you enjoy some of your favorite attractions, stop over to Cosmic Ray’s Starlight Café from 8 to 10am for a buffet style breakfast with cheese, cured meats, seasonal fruit, assorted yogurts, pastries, vegetable frittatas, pancakes, French toast, scrambled eggs with a variety of toppings, fried breakfast potatoes with caramelized onions, smoked bacon, and pork and chicken sausages. They’ll also have juice, coffee, and tea to drink.