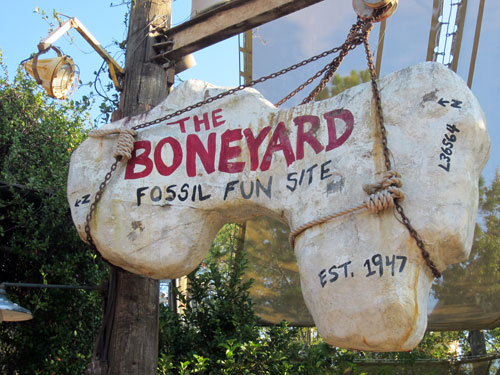 Where To Get Your Dinosaur Fix At Disney World

You might be surprised at how many dinosaur-related experiences that the young, and young-at-heart, can enjoy around the sprawling Walt Disney World property.

Nearly all of them are concentrated in Disney’s Animal Kingdom, but there is one at Disney Springs, too.

Let’s take a look at six of our favorite Dinosaur themed activities:

We will begin our journey of all things dinosaur in the Dinoland USA section of Disney’s Animal Kingdom. You know that you are in for some good dino stuff since you have to pass beneath a huge skeleton of a dinosaur just to get into this section of the park.

The Boneyard is a play area designed for kids 10 and under. They should be supervised by a parent, which means that if you are a parent with a kid 10 or under that you get to sneak in on some of the fun too.

In the Boneyard little paleontologists can explore a dig site that is complete with nets, slides, tunnels, and water. They can uncover bones and perhaps learn a bit along the way.

Another fun attraction in DinoLand USA is Primeval whirl. It is a more thrilling attraction and requires that riders be at least 48 inches tall. It’s basically a spinning roller coaster with a few drops and twists – fun but not really scary. It’s got a fun dinosaur / time travel theme. If you don’t mind a twisting ride, it is worth checking out.

Even more DinoLand USA fun: Of course an attraction that is simply called “Dinosaur” will be about dinosaurs. This one is dark with plenty of turns that bump you around. It is intense experience and not well suited for little ones. After you board your time rover, you are off on an adventure to capture an Iguanodon before a meteor shower destroys life as we know it (or as the old time dinosaurs knew it, anyway). The gift shop at the exit has some fun dino-related souvenirs.

Finally in DinoLand USA: Yes, these are just cheesy carnival games. But they fit the story of DinoLand USA perfectly. (If you don’t know the back story of Chester and Hester, be sure to read about it – you will definitely appreciate DinoLand much more.)

Finally, we get out of Animal Kingdom. Head over to Disney Springs and check out the T-REX Café, which is operated by Landry’s – the nice folks who also brought us the Rainforest Café. It’s similar to the Rainforest Café in the fact that it’s well themed, has plenty of things to see, and has an extensive store attached to the restaurant. It’s different in that it’s all about dinosaurs instead of the rainforest.

After you enjoy your meal of traditional American food (burgers, sandwiches, salads, etc.) among the mammoths and octopuses (octopi?), head through the Build-A-Dino store and create your own loveable dinosaur that you can take home with you. If you wander around Disney Springs, you are sure to see other smiling kids with boxes holding their own dino-creations, with the heads and tails sticking out of the carrier box.

What is your favorite dinosaur activity at Disney World?