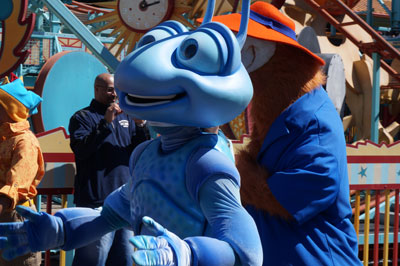 Disney has been making plenty of changes to its entertainment lineup.

It shut down the Ziti Sisters in the Italy pavilion of Epcot and also Miyuki, the candy artist, in the Japan pavilion. Disney is also planning to close down Mickey’s Jammin’ Jungle parade at Disney’s Animal Kingdom to make way for Avatar / Pandora construction.

On the plus side, Disney created the new Festival of Fantasy parade at the Magic Kingdom, which has been almost universally praised as a home run and a great addition.

Disney has now added the Dinoland Dance Party to Animal Kingdom. It is listed on the Times Guide at 11:30am and 12:30pm.

The Disney characters in the party seem to vary. I’ve seen reports that include the infrequently-seen Slim and Gypsy from A Bug’s Life. When I saw the party, it include Br’er Fox and Br’er Bear from Song of the South, Chip and Dale, and Flick from A Bug’s Life.

The dance party lasted about 20 minutes and included plenty of the usual suspects when it comes to dances, like the Macarena, YMCA, and What Does The Fox Say, which was, of course, perfect for Br’er Fox!

Overall, the party I saw was lots of fun and pulled in plenty of enthusiastic park guests. If you are in Dinoland USA around noontime, it’s worth checking out.