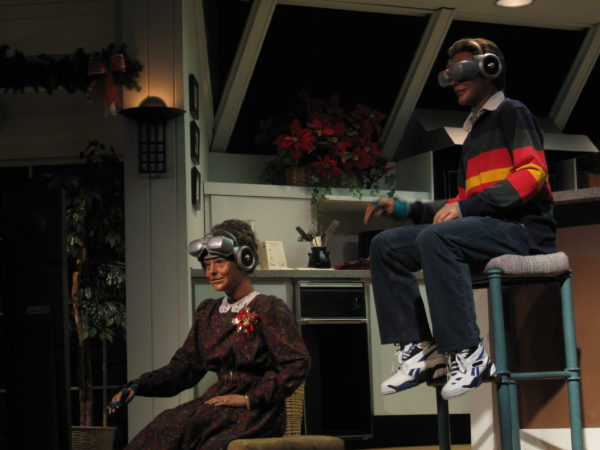 Grandmother with virtual reality glasses in Carousel of Progress

A Disney Vacation is a monumental occasion in life whether it’s your first visit or you’ve visited many times; it’s always something we Disney fans look forward to! The thrill of escaping reality and immersing yourself in the magic of Disney is incomparable.

But what if you could take that super-reality and make it even better?

Well, that could soon be a [virtual] reality!

Disney recently filed a patent for “systems and methods for enhancing accuracy of spatial location and rotational orientation determination of wearable head-mounted display device”. I don’t know about you, but that sounds a lot like virtual reality to me! The patent filing goes on to say that the new technology could be used on motor vehicles, aircraft, and water vehicles – i.e. cruise ships!

So what could this actually mean – in reality?

While we can experience epic attractions like Rise of the Resistance in the parks on dry land where space is not an issue, that is not as easy on a cruise ship where space is limited. Instead, this new technology suggests that virtual visual stimulation would be combined with real movements so the technology would adapt to your movements. Of course, Disney could also use this new technology on any of their properties. An important one I can think of would be the new Star Wars Hotel, Star Wars: Galactic Starcruise, which will be outside of Disney’s Hollywood Studios and connected to Star Wars: Galaxy’s Edge.

Gamification is very trendy right now, so it’s no surprise that Disney is innovating and imagining in this area.

While we don’t know exactly how this new technology could be used yet, we can be sure that it will be leaps and bounds above what Grandmother experienced in Carousel of Progress.

Would you try Virtual Reality onboard a Disney Cruise Ship?