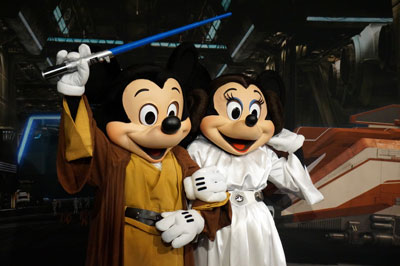 Star Wars Weekends always includes a multitude of limited edition pins, artwork, collectibles, and other merchandise. Where do you get all this fun stuff? Darth’s Mall.

For those of you who aren’t huge Star Wars fans, the name “Darth’s Mall” is a play on words for “Darth Maul,” who was the primary bad guy in Star Wars: Episode I.

In previous years, Disney set up the temporary mall in a huge air-conditioned tent not far from the Rock N Roller Coaster. However, for 2014, Disney put Darth’s Mall in Soundstage 1, which is a usually vacant building located between Toy Story Midway Mania and the Backlot Tour. It is THE place to go for Star Wars Weekends merchandise.

Lots to See and Do

Darth’s Mall hosts a few activities too. Ashley Eckstein holds signing sessions for “Her Universe” line of merchandise for female sci-fi fans. You can have your photograph taken with Mickey Mouse as Luke Skywalker and Minnie Mouse as Princess Leah. In addition, you can purchase some fun food items at Akbar Snack Bar (another fun play on words for “Admiral Ackbar,” an amphibious character who appeared in Star Wars: Episode VI).

Darth’s Mall is a popular place. On the opening day, I had to wait in a queue outside the building before getting to wait in another queue inside the building. After waiting for about an hour, I finally got into the mall itself. Disney Cast Members were only allowing new guests in as other guests left after completing their shopping and making their purchases.

Let’s take a look at some of the fun that’s happening inside Darth’s Mall:

Your Chance to Win