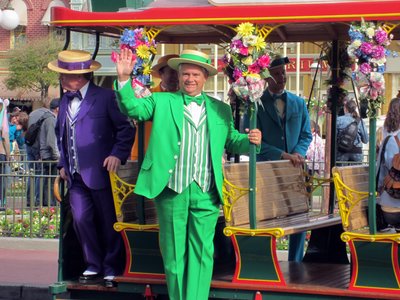 Barbershop quartet music has been around for a long time. It was most popular between 1900 – 1920, not coincidentally the time period that is represented on Main Street USA.

While the Dapper Dans are a barbershop quartet, there are actually eight different Cast Members at Disney World that make up the group. That means that different quartets can perform in different places, or the members can combine into larger groups. The group knows about 100 songs.

At the Magic Kingdom the old time harmonic style of the barbershop quartet met the 2000s boy bands trend as part of Limited Time Magic.

While it might seem a bit odd to hear a song from N Sync or the Backstreet Boys delivered in barbershop quartet style, it is actually very fun. Often the crowds laughed or smiled in appreciate for both the creative idea and the fun delivery by the quartet.

While the group normally sings acapella, they do use chimes in some songs. The chimes that the group plays are called Deagan Organ Chimes. There are eight different instruments, each representing one note of the C musical scale. They were built in Chicago in the early 1900s.

What do you think about the Dapper Dans performing modern music?