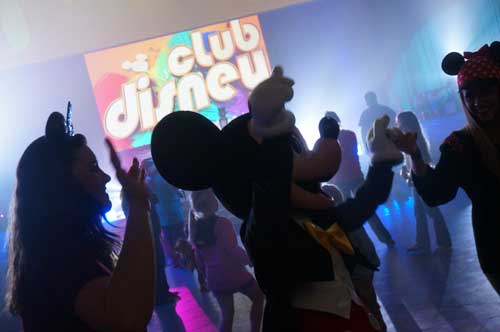 Boogie Down with the Mouse: Club Disney Opens in Hollywood Studios

Disney’s Hollywood Studios has seen quite a few closures in the past months, and the trend is sure to continue into 2016 as Disney gets ready for the huge projects needed to create Star Wars Land and Toy Story Land. We will certainly see more construction walls, and probably more closures to join the Backlot Tour, The American Idol Experience, and the Magic of Disney Animation.

That said, I’m sure the smart folks at Disney know that they need to provide some incentive for people to visit. The Studios park now ranks as the fourth (out of four) in popularity at the Walt Disney World Resort.

We recently saw Disney open the Star Wars Launch Bay, a surprisingly fun walk through attraction with plenty of props, merchandise, and a few character meet and greet experiences for those who would like to hug a Wookie or meet Dart Vader.

A funky DJ spins the tunes, and the techno-Disney songs are accompanied by large projections on the top portions of the walls. It is a high energy event. However, for those folks who are a little pooped out, there is some limited seating available.

For those who don’t want to get their dance groove moving, there are large drawing screens scattered around the edges of the space.

Are you glad to see a new dance party open in Disney’s Hollywood Studios?