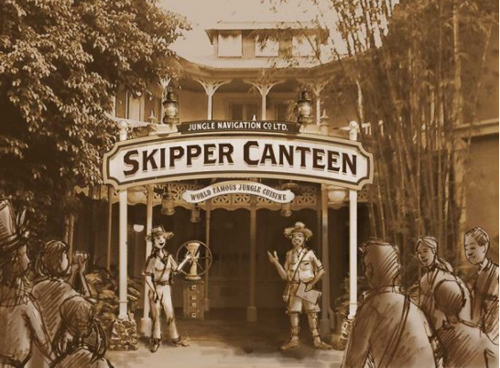 Disney World now has parks on three continents, and the parks continue to be top rated in the world. It’s no surprise that thousands of people showed up for the D23 Expo 2015 held in Anaheim, California from August 14-16.

I already posted an article regarding the announcement of Toy Story Land and Star Wars Land, which will be the largest single themed-land expansion ever.

Beyond Star Wars and Toy Story, a few other important things were discussed as well, including news about Avatar Land coming to Disney’s Animal Kingdom, Soarin’ Over the World in Epcot, and Magic Kingdom’s newest restaurant, Skipper Canteen.

I’ve already written a few articles about what’s to come for Avatar Land, so I won’t rehash those details. Here’s a short summary: Guests will enjoy a boat ride through the bioluminescent forest and ride on the back of a banshee.

The details are getting more specific though! The banshee ride will be called “Flight of Passage” emphasizing the fact that committing to a banshee is a right of passage and a requirement to survive in the lives of the Na’vi people.

Joe Rohde, the lead Imagineer for Avatar Land since the concept was announced, gave an inspiring speech. He said he wants guests to feel like what they just experienced was real. He said that Flight of Passage will be unique to each guest, and it may even be in the thrill ride category simply for the fact that it is so immersive.

Other things that will open in Animal Kingdom along with Avatar Land is the much anticipated Rivers of Light nighttime spectacular. It will be a “ceremonial event” with fog effects, barge projection, light, fire and water. The celebration of life itself appears to look a lot like Hollywood Studio’s Fantasmic. In fact, there has already been a barge projection test that depicted a running bear.

Finally, Joe said that Kilimanjaro Safari will also be expanded. More animals will be added to the existing species on the safari, and new two new species, African wild dogs and hyenas, will also be introduced giving guests and extended viewing opportunity.

Soarin’ Over the World

As if Magic Kingdom hasn’t already gotten its share of updates in recent years, there’s a new restaurant coming to Magic Kingdom! Fantasyland has been a massive hit, and those crowds need somewhere to eat.

To help balance out the options, Disney has already started construction on Skipper Canteen, which will open sometime later in 2015. In fact, the Adventureland Veranda is already boarded up and preparing to expand over Main Street U.S.A. Guests will enjoy jungle cuisine in several unique dining rooms including a crew mess hall and a previously “secret meeting room.”

The Skippers will likely act as servers who will probably tell the same corney jokes you’ve come to expect and love on the Jungle Cruise attraction. Is this a way to appease fans of the now defunct Paradise Island’s Adventurer’s Club of the old Disney Springs?

Although we don’t know for sure yet, some have speculated that Skipper Canteen will take a lesson from Be Our Guest and offer up quick-service lunch specials while converting to a table-service restaurant for dinner. This could allow the restaurant to appeal to a larger group of people and maybe even offer a Character Breakfast option.

Are you looking forward to the Skipper Canteen restaurant at the Magic Kingdom?