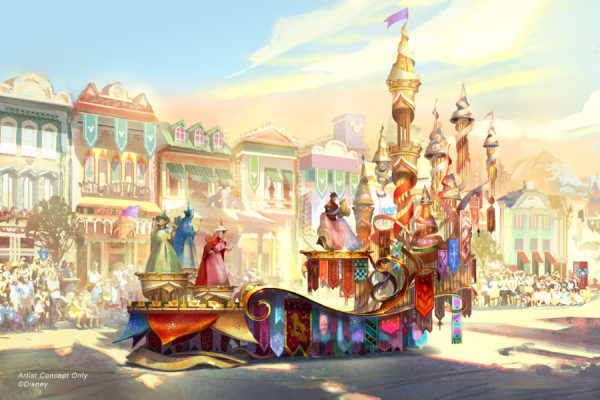 Set to debut in spring 2020 at Disneyland Park in California, the new Magic Happens parade will come to life with an energetic musical score and a new song produced in partnership with singer-songwriter Todrick Hall. The parade will feature stunning floats, beautiful costumes, and beloved Disney characters from “Moana,” “Coco,” “Sleeping Beauty,” and more – all led by Mickey Mouse and his pals. (Disney)

On Sunday, August 25, during the D23 Expo in California, Disney presented the highly anticipated Parks and Resorts update.

In this article, we will look at all the exciting news about Disneyland in California, the Disney Cruise Line, and more.

Bob Chapek, the Chairman of Disney Parks, Experiences, and Products, shared a slew of new announcement and concept art, as well as some updates to previously announced projects.  I had a chance to watch the presentation in live simulcast from Disney Springs,  courtesy of the nice folks at Disney Media relations.

I’m happy to share all the exciting announcements with you.

The first announcement of the presentation was that Disney is bringing an all new parade to Disneyland called Magic Happens.  This new daytime parade will include characters both new and old, including Moana, CoCo, Sleeping Beauty, and more.  The parade will also feature a new song by Todrick Hall.  The new parade is coming this spring.

Disney showed concept art of the version of Mickey and Minnie’s Runaway Railway coming to Toontown at Disneyland in 2022.

Disney discussed some details around a new land called Avengers Campus.  As the backstory goes, will the new land will be set up to recruit new, future Avengers (meaning you!).

The Pym Test Kitchen will feature technology, the story goes, to grow and shrink food.

The Spider Man experience will be part of phase 1 of this expansion, opening in 2020.  A second, future phase will include an E-ticket attraction that allows you ride a QuinJet and to fly to Wakanda and other locations using a brand new ride system.

Disney has been hard at work designing and development a second private cruise port – Lighthouse Point on Eleuthrea.  It will feature a sea side adventure camp to bring attention to the natural beauty of the area.

Disney Imagineer Joe Rhode took to the stage to explain how Disney has been working with local painters, storytellers, weavers, and other artists to highlight the Bahamian culture.

Disney is adding to their fleet of existing ships – the Fantasy, Magic, Dream, Wonder.  The name of the 5th ship will be the Disney Wish.  Disney will accept delivery of the ship in 2021, and it will set sail with guests in January, 2022.

The stern character for the new Disney Wish will be Rapunzel.

The castle in Hong Kong is getting a major makeover.  It will not be inspired by just one specific character, but rather by multiple characters.  The new structure will be called the Castle of Magical Dreams.

The park will also get a new Frozen land with two attractions: the brand new Wandering Oaken’s Sliding Sleighs coaster, as well as a copy of Disney World’s Frozen Ever After.

Excited about the Disneyland parade and cruise ship – the Wish?