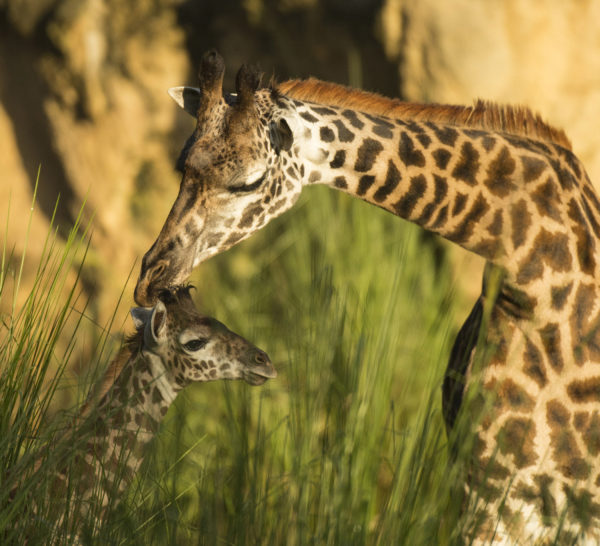 On Aug. 28, 2018, Aella, a 2-month-old Masai giraffe calf, walked out onto the savanna at Disney’s Animal Kingdom for the first time. Accompanied by her mother, Lily, the calf is approximately six feet tall and is viewable by guests aboard Kilimanjaro Safaris at Disney’s Animal Kingdom, one of four theme parks at Walt Disney World Resort in Lake Buena Vista, Fla. (David Roark, photographer)

Look out for Aella (pronounced “eye-la”), a two-month-old Masai giraffe, the next time you take in Kilimanjaro Safaris savanna.   She is now on-stage, and is easy to spot since she is the smallest giraffe on the savanna.

Aella was born on June 29, 2018.   She was more than five-feet-tall at birth, and has been spending her first months bonding backstage with her mom Lily.

Aella was named after an Amazon warrior.  She has already established herself as a brave young giraffe – curious and independent. She’s explores on her own and even occasionally leaves mom Lily a few steps behind.

Aella’s is the first born for parents Lily and George, who are part of the Species Survival Plan (SSP).  The Association of Zoos and Aquariums oversees the SSP.

Aella will nurse for about a year, and then and then will feed on the vegetation in the savanna. She will eventually eat up to 75 pounds of food a day.

The Masai giraffe is found mostly in Kenya and Tanzania.  Scientists believe there are about 32,000 Masai giraffes left in the wild.  Their population continues to decline because of poaching and habitat loss.

New baby giraffe at Disney’s Animal Kingdom:  Will you look for her?