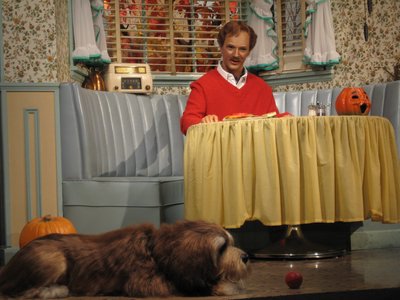 Creating the Cast of the Carousel of Progress

It is an audio animatronic show in a revolving theatre, set amid the futuristic spires of Magic Kingdom’s Tomorrowland. The show was designed by Walt Disney himself for the 1964-1965 New York World’s Fair, after which it spent seven years at Disneyland Park in California. Shortly after the opening of Magic Kingdom, the entire show was transported to Florida, where it has lived ever since.

Art And Technology Come Together

The show follows an American family living life as technology develops and changes, changing their lives right along with it. The immortal cast of the show was created with the contributions of sculptors, live models, voice actors, and the Imagination of Walt Disney and the Disney Imagineers. Walt Disney demanded tremendous attention to detail and realism – so much so that a duplicate of the character of Grandma was taken on a promotional tour and frequently mistaken for a real person.

The sculptors who created the bodies for each character typically used live models as inspiration to help them create completely realistic figures. Grandma’s sculptor – Blaine Gibson – has claimed that his wife’s grandmother served as the model for his creation. Television and film actor Preston Hanson was the model for the father, and had a life mask of his face cast, while a professional artist’s model sat for the sculptors creating the mother. The son and daughter of designer Chuck Myall served as the inspiration for the son and teenage daughter in the show. Imagineer Harriet Burns used her own arms and hands to create molds for the arms of the daughter and mother.

The dedication to realism did not end with the human characters in the show. A pair of robins seen through the window in Act I are the same birds from the Disney classic “Mary Poppins”. Insisting on real skin and feathers for his birds, Walt Disney bartered for a pair of deceased robins from the Los Angeles National History Museum in exchange for Disneyland tickets. He consented, however, to allow the dogs in the show to be made from artificial fur, acknowledging that the audience would likely be horrified and disgusted if they used real stuffed dogs.

A cast of voice actors was also used to bring these characters to live. The most famous name to (almost) appear in the show was Mel Blanc, best known for voicing Bugs Bunny and Elmer Fudd. However, the cousin Orville character he recorded was eventually turned into a mute, and only given voice years later. The father in the show was given the voice of Cowboy singer Rex Allen. Rhoda Williams, who voiced Drizella in the Disney film “Cinderella”, provided the voice for the mother. And those robins in the window got their chirps from the same man who created the voice of Donald Duck – Clarence Nash.

Updates To The Timeliness Story

Throughout the process of creating the Carousel of Progress, Walt Disney was involved with the design and the writing of the show. Many changes have been made over the years, large and small, but the show remains a great example of Disney’s creativity at work. And since the show itself is all about progress and change that has gradually made life better, Walt Disney would almost certainly approve of the ways in which his successors have kept his creation updated with the passage of time.