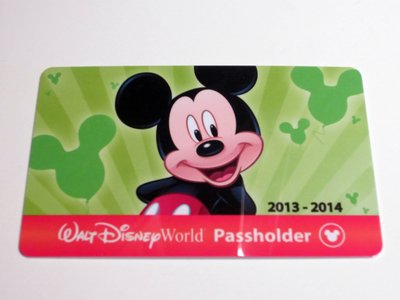 Disney World continues to take steps on the gradual roll out of the NextGen project, which promises to remake the vacation experience for Disney World guests.

For some time Disney has been changing the entrance turnstiles over from the traditional gates to the new ‘gate-less’ entrances, which feature sleek poles that read the new RFID enabled Disney World tickets. As of March, 2013, Disney has changed about half of all the admission gates across the various Disney World theme parks to the new RFID readers, while the other half remain with the old-styled turnstiles.

Until now, only people who were staying at a Disney Resort hotel or who had just purchased their admission tickets received RFID enabled tickets and could therefore use the new gate-less entrances. Existing annual passholders and people with old tickets still had the old paper-based tickets, which did not have new the RFID technology – so they had to use the old turnstiles.

Passholders Can Get RFID

Starting on March 20, 2013, existing annual passholders, and those purchasing new passes, can get RFID enabled admission media. The new ticket media is a plastic card that looks just like a traditional credit card. The new cards have embedded RFID technology, as opposed to the old ticket media which was made of paper and had a bar code and a magnetic stripe.

No Requirement To Change

Existing annual passholders are not required to upgrade their annual passes at this time, but may do so if they wish. However, since it generally seems to be much faster to use the RFID admission gates, at least with the current mix of paper vs. RFID tickets in circulation, I suspect that many annual passholders who live nearby Disney will elect to make the switch to RFID.

All old ticket media and new ticket media, including annual passes, will continue to work with FastPass just as it has in the past. And the new RFID passes contain a magnetic strip (just like the old paper tickets) that can be read by the old FastPass machines. I personally tested this out by using my new RFID Annual Pass to get a FastPass at Test Track with no issues.

At this time, there are no MagicBands for annual passholders, people staying at Disney resort hotels, or people purchasing daily admission tickets.

Disney definitely seemed to be ready for an onslaught of Annual Passholders who might be anxious to change over to the new media. When I showed up first thing in the morning, there were very few passholders – but it was early on a rainy day. If and when the masses of passholders show up, Disney seems to be ready to handle it.

Disney also did a nice job of decorating the Odyessey event center with displays that any Disney fan would love. There were examples of old Disney tickets from the past, a display of a doll from It’s A Small World, and a working A-1 Audio Animatronic hand. Very cool stuff, and a nice move.

What do you think about this next step in the NextGen rollout?