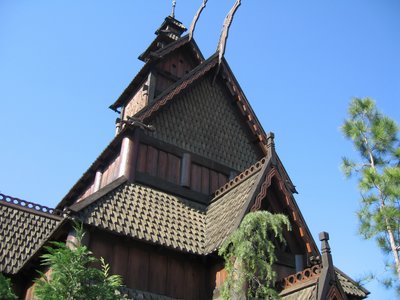 After 25 Years, Controversy Over Norway Pavilion Movie Still Stuck in 1988

Way back on May 6th, 1988, Disney opened its newest country pavilion – Norway. It’s hard to believe that it has been 25 years. In that time, there have been relatively few updates to the Norway pavilion.

Some parts of the pavilion, especially the film after the main attraction, now look very out of date. And that has some people who live in the real Norway up in arms.

The old film, with images of ancient computers and funky 80’s clothes and hair styles, portrays their homeland as outdated and stuck in time.

But that all comes down to money, which we will discuss at the end of the article.

First, let’s take a look at what you can see and do in the Norway pavilion, and then talk a bit about the future of an out-of-date Norway.

The café and bakery in Norway, with the very Norwegian name of Kringla Bakeri og Kafe, is a very popular counter service location. The shop sits within the shadow of the Stave church. Check out the popular freshly-baked sweet pastries displayed in glass cases, including the very popular School Bread (a sweet bread with vanilla pudding in the middle, then covered with icing and coconut) and Lefsa (a potato bread with butter and cinnamon). You can also get a variety of sandwiches and soup.

The other dining location in Norway is Akershus, a table service restaurant. Akershus offers Disney character dining at each meal with Disney princesses. Cinderella doesn’t show up here, but you may see other princesses or leading Disney ladies like Snow White, Belle, Jasmine, Princess Aurora from Sleeping Beauty, Mary Poppins, and Mulan. It’s very popular, so I highly recommend making reservations in advance. The breakfast buffet includes your typical eggs, bacon, sausage, and fruit, while dinner entrees include dishes like salmon, chicken breast, and beef tips.

Maelstrom is the attraction in Norway – one of the few non-movie, non-show attractions in World Showcase (the other that I can think of is Gran Fiesta Tour Starring The Three Caballeros in the nearby Mexico pavilion). Once in your Viking boat with 15 new friends, you pass by trolls and oil rigs. The ship moves backwards and comes to a stop before going over falls on the outside of the attraction. At the end of the ride is a movie which is creating a bit of controversy. More on that later.

The Puffin’s Roost is a nicely themed store with books and collectibles on all the standard Norway themes: trolls, Vikings, and fairy tales. The shop carries authentic Norway food, jewelry, and perfume.

Many people walk right by the iconic Stave church, thinking it is only an icon. But you can actually go inside. The carefully crafted building matches the traditional Norway design from around 1200 AD. At one time there were around a thousand of these churches in Norway, but now only a handful remain. Inside the church you will find displays that includes artifacts, weapons, and dioramas of the famous Norway Vikings Olaf II and Erik the Red.

All About The Money

Now let’s take a look at some of the issues behind the somewhat controversial movie in the Maelstrom attraction.

Disney relies heavily upon sponsorships to build and maintain pavilions. This seems to be especially true at Epcot, where nearly everything that remains open is supported by a large corporation.

According to Allears (source), Disney’s original plans called for a Scandinavian Pavilion would have covered the countries of Denmark, Sweden, and Norway. However, it was investors in Norway who came up with the $30 million required to build the pavilion, so the broader Scandinavian theme was out and a specific Norway theme was in. The original sponsors sold their interest back to Disney in 1992. The government of Norway kicked in about $200,000 a year through 2002, but now there is no sponsorship at all for the Norway pavilion.

And with no corporate sponsor, there is little incentive and little money for Disney to make updates.

Controversy Over The Movie

The film at the end of Maelstrom still depicts a Norway locked in the 1980s, with ancient looking computers and out of date fashion. A Norwegian language web post calls the film an “embarrassing advertisement” for Norway (see English translation here).

Reports (source) state that the Norway marketing group Innovasjon Norge took it upon themselves to prepare an updated film and offered to give it to Disney to upgrade the post-Maelstrom film. However, Disney said that it was not up to their quality standards. Instead, Disney wants someone to pay them money so that they can make a new film themselves.

And so it is that poor Norway, at least the version in World Showcase, is locked in 1988. Without some sponsor with deep pockets stepping up, it may be unlikely that the Norway film will get a badly needed update anytime soon.

What do you think about the Norway movie?