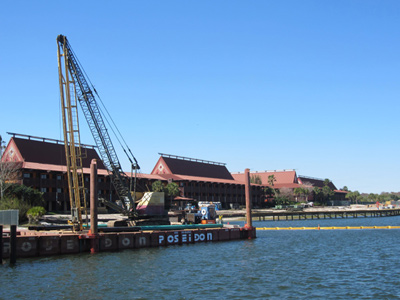 Reports state that Disney has finally made an official announcement that the main lobby of Disney’s Polynesian Resort, the Great Ceremonial House, will be reworked from March to December, 2014.

Disney has not announced details on just what changes they will make to the iconic Polynesian, but I’ve got some guesses based on the information they have released.

Let’s take a look at some of the facts and rumors around the lobby, the dining options, and the new Disney Vacation Club construction that is happening now. We will also discuss a possible new name for the Polynesian.

One of the most unique features of the Polynesian is a giant waterfall and tropical foliage that have been part of the center of the resort’s main lobby since it opened. Rumors are that the waterfall will go, and that Disney wants the new lobby to have a clear view from front to back and out onto the Seven Seas Lagoon.

Captain Cooks, the quick service restaurant (that just so happens to serve Dole Whip), will close from March until June. Disney states there will be a temporary restaurant open during construction, and rumors suggest it will be located in a building called Cast Cove, which is pretty close to the Great Ceremonial House.

It seems pretty likely that Disney will make sure there is still some way to get Dole Whip since I’m sure they don’t want an outright revolt of guests. Dole Whip has a cult following and has even inspired t-shirts in Disney shops.

There is a rumor that the now-closed Wyland Gallery, which sold expensive marine-themed art, could become an ice cream shop. Perhaps when Disney offered Dole Whip with rum at the Epcot Flower and Garden Festival last year, it was a test of some new Polynesian-inspired ice cream treats for this location.

The announcement states that Disney will indefinitely close the eastern part of the beach on the Poly property. This has been closed for some time anyway as construction of the Disney Vacation Club at the Poly continues.

The same report stated that the DVC expansion will include converting two of the eleven existing buildings from standard guest rooms to DVC rooms. In addition, Disney is expanding out and over the Seven Seas Lagoon. Apparently Disney plans to build bungalows over the water, like those you might see in Tahiti. Disney hasn’t announced the bungalows, but based on the construction that is clearly visible from the shore and from the ferry boats, it seems pretty certain that is what will happen.

Part of the rumor is that the overall resort will return to its original name that it had back in 1971: the Polynesian Village. Disney changed the name to Disney’s Polynesian Resort in 1985.

Do you like the changes planned for the Polynesian?