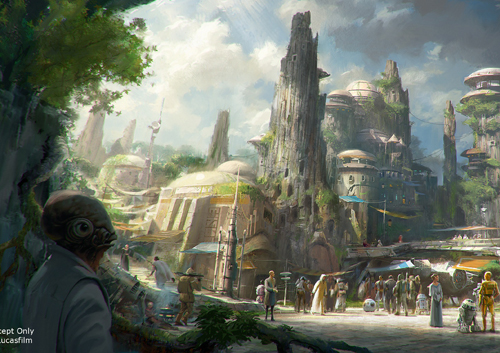 Over the past months, Disney has closed many different attractions at Disney’s Hollywood Studios. We’ve said our good byes to the Magic of Disney Animation, the Animation Academy, the Studio Backlot Tour, The American Idol Experience, and the Legend of Captain Jack Sparrow.

Until now, there have been many subtractions, and no additions.

That has just changed.

Disney’s Hollywood Studios, and Disneyland in California as well, will add a new 14-acre land to take guests into the Star Wars story. It will include two major new attractions: one which simulates a ride on the famous Millennium Falcon ship from the movies, and a second which tells the story of a Star Wars battle.

The presentation on this new Star Wars Land was carefully worded, noting that it takes time to build out these new environments. Translation? It may be a while before you see this.

Still, Disney knows that the timing is right for more Star Wars given the upcoming Star Wars Episode 7 film to be release in December, 2015. Disney will open some new, less-ambitions attractions in the short term.

In late 2015 Disney will add new scenes and characters to the existing simulator ride featuring the story from the new film Star Wars: The Force Awakens.

To me this sounds like part museum and part movie promotion for Star Wars Episode 7. It will include exhibits, behind the scenes information, character meet and greets, merchandise, and food. It will be located in the Animation Courtyard at Disney’s Hollywood Studios and should open in late 2015.  It is nice that it is coming so soon – just in time to cross-promote the movie.

Disney will rework this popular but small live show to include new characters.

Season of the Force

This one sounds like Star Wars Weekends 2.0. The new seasonal event will begin in early 2016 and will include a nightly fireworks show. Details were thin and it is hard to say what might happen beyond the things we already see in Star Wars Weekends.

Disney will add a new 11-acre land that will take guests into Andy’s backyard from the Toy Story movie. In addition to the previously announced third track already being added to the ever-popular Toy Story Mania attraction, Disney will add two new attractions.

Those little three-eyed green aliens (I love those guys!) will take guests for a spin flying saucers.

It is exciting to think that not just one but two new lands will come to Disney’s Hollywood Studios, especially after we have seen so many attractions close.  However, Disney didn’t announce the timing, so we will probably wait a while for these new lands.

Your take on the additions to Disney’s Hollywood Studios: Excited or Disappointed?