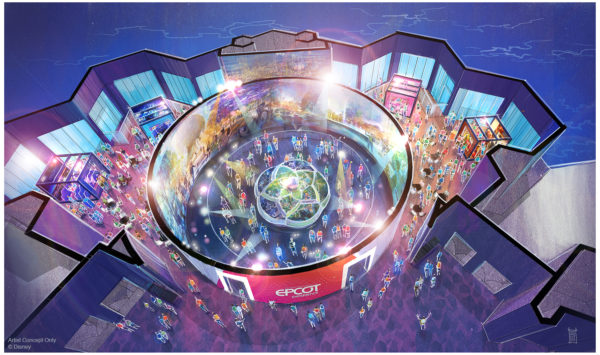 Guests will be able to visualize the exciting plans for Epcot when doors open Oct. 1, 2019, for Walt Disney Imagineering presents the Epcot Experience. They will discover engaging and interactive exhibits that showcase the relentless innovation, energy, and excitement driving the park’s future. (Disney)

The D23 Expo is underway and Disney is making plenty of announcements about changes coming to Walt Disney World in the upcoming years.

The new Star wars hotel has an official name: The Star Wars: Galactic Starcruiser will offer two-night stays in a glamorous starship where lucky guests will interact with characters. They will also play a role in their own stories that happen in the hotel (starcruiser) and in Galaxy’s Edge at Hollywood Studios.

Disney has already started demolition in the entry areas of Epcot, with lots more tocome. The new Epcot will mirror the themes Disney has already announced for the makeover of the park: more Disney, more family, more timeless, and more relevant. Each new release of concept art shows the design of the park changes more clearly.

Part of the Epcot makeover will include Journey of Water, a water feature that takes its inspiration from the Disney movie “Moana.”

Starting in October, 2019, visitors to Epcot will be able to see models and exhibits outlining the plans for the new Epcot in a new experience center in the Odyssey Events Pavilion. The exhibit will be called Walt Disney Imagineering presents the Epcot Experience, and it will include interactive exhibits showing some of the details to come as part of the parks mult-year makeover.

Looking forward to the Epcot makeover?