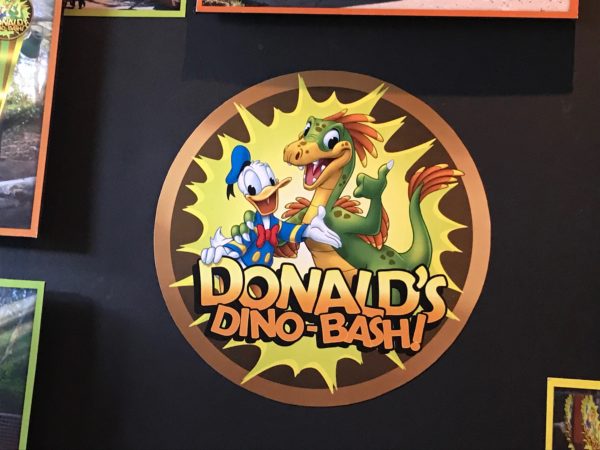 Disney Creative Entertainment is working on a new overlay to the Dinoland section of Disney’s Animal Kingdom. We’ve got some great backstory information and concept art of this change which is coming soon.

Donald just found out that his ancestors are dinosaurs!  He couldn’t believe the news, and wanted to celebrate. He asked for some funding from his rich uncle Scrooge.

Donald and his friends jumped into a traveling billboard vehicle, left Duckburg, and headed to Disney’s Animal Kingdom.

All of Dinoland will have a celebration overlay to celebrate the connection to dinosaurs.

Dinoland will be the new character destination for the park, taking over the role from Camp Minnie Mickey. If you’re familiar with the history of Disney’s Animal Kingdom, you might remember that Camp Minnie Mickey was the spot to meet characters in the park. However, that area was removed to make way for Pandora.

There will be seven new meet and greet spots featuring eight different characters. Dinoland also feature a new dance party at night.  This will provide a new destination, especially for younger kids who are too young for the other attractions in the park.

The planned opening date for Donald’s Dino Blast is memorial day weekend, 2018. It will be a part of the Incredible Summer celebration at Walt Disney World.