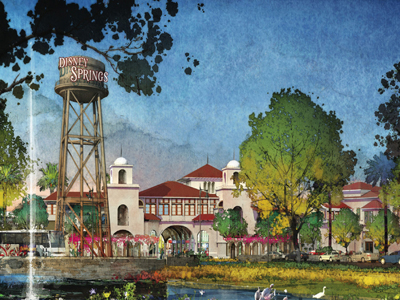 It’s been a long time since September, 2008, when Disney closed down Pleasure Island and turned the center of Disney Springs into something of a ghost town.

Than after that move, back in November of 2010, Disney announced Hyperion Wharf – which was supposed to be a three year makeover of Disney Springs that included new shops and restaurants. That project was supposed to create 600 new construction jobs and 500 new permanent jobs.

But then nothing happened. It seems that Hyperion Wharf was put on hold, or perhaps cancelled altogether.

Now we know what was going on. Disney was making plans for something bigger. Something better. And they announced those plans on March 13, 2013. The new plan? It’s called Disney Springs.

The project is (again) a three year makeover of Disney Springs. But now the scale seems much bigger, with an estimated 1,200 construction jobs and 4,000 permanent jobs.

The new version of Disney Springs will add restaurants, shops, and entertainment in addition to springs, waterfront areas, and public walking areas.

Disney Springs will be divided into four major areas:

Construction is slated to start in April, and the new sections of Disney Springs will open in phases over time.

What do you think about Disney Springs?