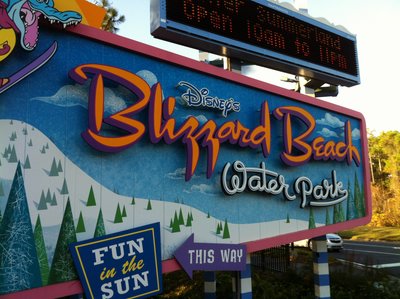 Compare Orlando Water Parks: Wet Adventures At Disney And Beyond

The thermometer can hit ninety even in October. But when the heat gets to be too much, many visitors to Orlando like to cool their heels (and all the rest) at one or more of the area’s water parks.  In this article we will compare Orlando water parks.

Blizzard Beach and Typhoon Lagoon are the well-known parks that Walt Disney World offers for those who don’t want to leave the confines of the World but want to enjoy some bathing suit-clad good times. There are various advantages and disadvantages to each, depending on age group and type of attraction sought. We break them down here. One drawback that the two water parks at Disney have in common is that the meal planning is a bit lacking, resulting in long queues for expensive food around lunchtime. Fortunately, unlike the theme parks, these Disney water parks allow visitors to bring food in.  Many families opt to enjoy a picnic lunch in one of the many shaded areas. It pays to arrive at the park after eating a full breakfast and of course to arrive well in advance of opening time. That way, everyone can hold out until a convenient lunchtime after the typical noontime rush.

Blizzard Beach features an obligatory lazy river, a carefully developed kids’ area, and several high-speed group and solo waterslides. There is a pretty good spread of options for vacationers who have a group of mixed ages and interests. It is quite important to choose attractions that are age-appropriate, and sometimes taste-appropriate as well. Summit Plummet is the tallest and fastest waterslide that Disney offers, but can leave even season watersliders a bit beaten up if they’re not careful (at this attraction, riders can reach speeds of up to fifty or sixty miles per hour!) The lifeguards can maintain safety, but they can’t tell us which rides will be perfect for us, so it’s left up to the consumer to read the reports and decide for themselves.

Typhoon Lagoon is Disney’s other water park offering. Aside from a lazy river and several stellar slides ranging from the very tame to the adventurous, the Lagoon is home to Shark Reef which is a truly singular attraction among the region’s water parks. The scuba certification association NAUI lends its expertise to this snorkelin’ hole, where guests can don all the safety equipment required and take a surface swim over several species of fish, not the least of which are the tame bonnethead and leopard sharks that are a huge draw!

Naturally, some guests love Typhoon Lagoon, others prefer Blizzard Beach. The crowd dynamics at the Lagoon can be challenging; slides really fill up quickly and the lines can be lengthy. Many feel it’s worth the wait to experience some of the really high-energy slides, such as Gang Plank Falls and Crush ‘n’ Gusher. Others make the most of their experience by rising early, getting to the park ahead of time with tickets in hand, and bypassing the locker area. Many people, though arriving early, get bogged down in organizing lockers to store their stuff and miss the relative calm of the early day lines.

If visitors are brave enough to loose the bounds of Walt Disney World, they’ll find that there are of course competing parks in the area with their own watery offerings, including Sea World’s Aquatica and the independent Wet ‘n Wild water park.

Aquatica is on International Drive in Kissimmee. Tickets purchased online are about forty-five bucks for kids and adults; at the door, they’re fifty-one for grown ups and forty-five for kids. Guests can also make use of Orlando Flex Tickets to get in. The park is nicely landscaped with foliage appropriate to its semi-tropical theme and places emphasis on natural beauty rather than artificial. The largest slide that Aquatica offers is the Taumata Racer. It takes about twenty seconds to launch down this carnival-style racer, and they’re all spent on the edge of the mini-raft! Aquatica is touted as the only combination of marine exhibits and water rides in Orlando. It’s true that there is a pool of beautiful and playful, not to mention rare Commerson’s dolphins and there’s a ‘ride’ where visitors can pass through a tube that views the dolphins from below. It’s a very cool idea but in reality the view is very brief and the dolphins are probably best viewed from above their enclosure.

Aquatica is also home to the large wave pools Big Surf Shores and Cutback Cove. What’s unique about their wave generators is their placement side-by-side; one churns out decent-sized bodysurfing waves and the other spurts out less dramatics ones suitable for even timid swimmers. The waves all break on an enormous artificial white sand beach where sun lovers loll in the rays.

The independent of the bunch, the good folks at Wet ‘n Wild have primarily focused on their attractions and dining areas and have not gotten very excessive as far as landscaping or decoration go. It’s a good formula for them them that translates to a nice variety of attractions to enjoy. For starters, they have several of the ubiquitous inner tube or raft rides including Brain Wash which starts out with a fifty three foot plummet into a helter-skelter turned inside out where two or four riders descend another sixty-five feet in their raft. Wet ‘n Wild also has several fun mat or body slides including Der Stuka and Bomb Bay. Both of these skin-to-slide attractions start riders off with a plummet into a staging area and follow it up with a thrilling 252-foot speed slide to the bottom. With nothing enclosing these slides, half of the thrill comes from seeing the real world pass you by at unusual speeds.

Wet ‘n Wild’s crowning glory, however, is their private lake, the Wake Zone. Though the hours are extremely limited (and constrained by season) and the lines long, it’s well worth the wait. There are tons of towed activities to do here, from wakeboarding to tube towing, all with proper safety gear of course.

The next time you are in Orlando, be sure to check out the variety of family friendly water parks.  You will cool off and have a great time.