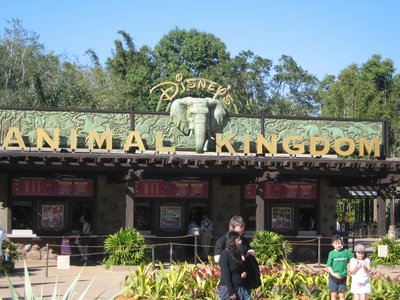 Let’s take a few minutes to compare Disney’s Animal Kingdom vs Universal’s Islands of Adventure – two parks that are in direct competition for the same customer base and are each doing their utmost to win the race. As is typically the case, the customer benefits from this competition. Each park has its own unique thrills and attractions, which we’ll discuss and rate in the current article.

It’s highly recommended that you arrive well in advance of opening time at either of the parks, and that they do so with tickets in hand. Waiting to buy tickets at the park’s entrance gate will place you at the back of a potentially very long line and will guarantee that you will pay the highest retail price for admission.

How to get to either park is something that needs explanation. In the case of Universal’s Islands of Adventure, guests exit interstate 4 and park in a multistory parking garage. Parking is fifteen dollars a day, which reduces to three after six p.m. The preferred parking that can be had for twenty dollars is of no benefit; the ‘cheap seats’ will do fine. Next, visitors travel on moving walkways to the parks’ entrances, following the signs on Universal’s CityWalk to their destinations.

One of the newest and most popular quarter of Islands of Adventure is The Wizarding World of Harry Potter. The sheer biomass concentrated in this portion of the park as early as 30 minutes after opening may be enough to change the planet’s rotation. So, if a group’s main aim is to enjoy the attractions in the Wizarding World, they are well advised to queue up at least half an hour before the park’s opening, else be left in the dust of the droves determined to dash directly to this destination. However, if the Wizarding World is but one of the things that a group wants to get to, they can always get to it later in the day. Whenever they get to it, they should hit the two most popular rides, Forbidden Journey, followed by Dragon Challenge. Later in the day, wait times will be excessive, but the rest of Harry Potter land is relatively free of human obstruction.

A Harry Potter-centric day at Universal should proceed as follows: Harry Potter and the Forbidden Journey, Dragon Challenge, The Incredible Hulk Coaster, Spider-Man minus Dr. Doom’s Fearfall and Popeye and Bluto’s Bilge-Rat Barges. If the group can live without Mr. Potter on their visit, they should start with The Incredible Hulk Coaster then continue with Spider-Man, Dr. Doom’s Fearfall, Popeye and Bluto’s Bilge-Rat Barges and Dudley Do-Right’s Ripsaw Falls. Many of these rides provide quite a few splashes, so guests who don’t relish walking several kilometers in wet socks are advised to bring something waterproof to wear.

Osceola Parkway (off of US 192) in Orlando is home to Disney’s Animal Kingdom, which occupies the southwest quadrant of Walt Disney World. Driving is an option for those who wish to pay extra for parking, and like most other things, it pays to arrive well in advance of the park’s opening time due to the glut of drivers that piles up during the last fifteen minutes or so. Shuttles of course are available from all Disney resorts as well as from most of the area’s hotels, who are just as eager for visitors’ business.

Opening times for the Animal Kingdom vary widely with respect to season and other factors. This statement applies only to the front gate, however. Megalithic theme parks, despite their size, are not immune to market forces, and even Disney occasionally makes adjustments to deal with changing economic conditions.  As a direct result, there have been times when the park closes as early as five p.m. during certain times of the year (it pays to call ahead or check the Disney web site to find out). Furthermore, some attractions within the park have been opening later than others as a cost-cutting measure.

The relatively round park is laid out like a bicycle wheel, with paths radiating out from Discovery Island (via the Oasis) to all of the other areas, including Africa, Asia, Dinoland U.S.A. and Camp Minnie-Mickey (the extremely congested Animal Kingdom headquarters of the Disney characters meet and greet areas). The most important thing to remember about this park is that rushing through will blur the details. It’s best to slow down and pay attention to both the incredible details as well as the animals. Just like in nature, the animals will only show themselves when they don’t feel threatened.

The vastest of all of these destinations is Africa. Disney has set up a typically sugar-coated and deep-fried in pixie dust depiction of a pastoral contemporary African town, Harambe. One of the most interesting attractions is Kilimanjaro Safaris, featuring rhinos, zebras, wildebeest and other African animals viewed from large touring boats.

Dinoland U.S.A. at Disney’s Animal Kingdom is much campier than Africa, purposefully taking on the air of something one might find along route 66 driving through a long stretch of New Mexico. It features an enormous replica of the largest T-rex skeleton exhumed to date and DINOSAUR, one of three adventure rides that the park has. DINOSAUR combines the best elements of Star Tours and classic roller coaster rides. Also of interest, mainly to the young’uns, is the Boneyard, where faux paleontological dig sites delight youngsters as much as jungle gyms fashioned to resemble dino skeletons do.

Asia is home to the thrilling Kali River Rapids. For this attraction, guests ride on high-seated river rafts that are not tethered at all and float free through the rapids and currents of the river while seeming to narrowly avoid being dashed on rocks or other obstructions. On this ride, guests will get very wet, and are encouraged to either take part when the weather is very hot or bring appropriate rain gear.

Flights of Wonder is also found in Asia, which is a 30-minute stage show featuring dozens of interesting bird species – including a few that will fly right over your head so get your cameras ready. These birds don’t recite the Gettysburg Address, however; their training only encourages their natural survival techniques, which when displayed are a huge hit with audiences.