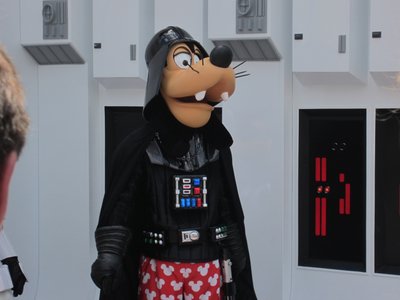 Normally earnings calls, where public companies like Disney announce their quarterly financial results, are pretty boring. You hear about lots of numbers and lots of general talk.

You don’t get much much news beyond the financial numbers.

But the earnings call that Disney recently held revealed two interesting new facts, which are official since they came directly from out of the mouths of Disney’s top management.

Bob Iger is the CEO of Disney – the top mouse so to speak. He said this: “In addition to the Star Wars feature films that we’ve already talked about, we’re also working on opportunities for television and our parks.” And this: “It’s still very early in the process. We’ll announce details as these developments evolve.”

So while this isn’t an official announcement that we will see a Star Wars land somewhere at Disney World, it seems that Disney management is seriously considering it. After all, they need to earn lots of money off the $4 billion they spent to purchase Lucasfilm.

Many Disney fans have been less than excited about MyMagic+. Sure, it’s nice to get into the park entrance gate faster with the new RFID ticket media, but the idea of so much planning has some people questioning the value of this NextGen effort.

All that may be true.  But Disney understand the real value of NextGen: to create more profits.

Disney’s Chief Financial Officer Jay Rasulo made an interesting comment when asked about MyMagic+: “We have known for a really long time that getting our visitors to Walt Disney World to make decisions about where they spend their time before they leave home is a powerful driver of visits per guest. When they get into the Orlando market and their time isn’t yet planned, they can be subject to everything you see down there, which is a lot of in-city marketing for all the many products that people have put there to basically bleed off the feed that we fundamentally motivate.”

Jay went on to say: “So if we can get people to plan their vacation before they leave home, we know that we get more time with them. We get a bigger share of their wallet. So that’s one thing for you guys to think about. And the second thing is what happens to purchases when they become much more convenient, and you don’t spend time queuing up for a transaction, queuing up to get in the park, and you actually have more time to enjoy the entertainment and, subsequently, spend more money doing things — other than standing in line, which, of course, you can’t spend any money while you’re doing that.”

So I heard two things: One, when people plan ahead to spend all their time at Disney, they spend all their money at Disney. They don’t wander over to Sea World or Universal. And two, when it is easy to pay for things, people spend more money.

So there you have it directly from Disney management. With all the questions swirling about planning ahead and data protection, it really comes down to Disney using the system to keep people on their property and make more money.

And there is nothing wrong with that. It is how all companies work, and it is with those earnings that they can do more in the future. Like build a new Star Wars land.

What do you think about Star Wars land and MyMagic+?