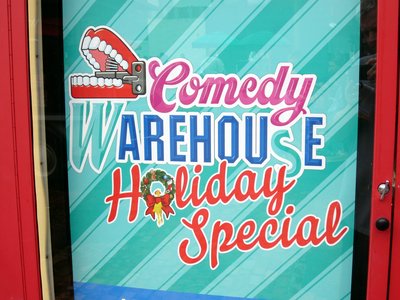 Disney World gets terribly busy between Christmas and New Years. In fact, that time is probably the busiest of the year, with crowds so large that Disney sometimes has to limit access to the parks. And because the crowds are so big, Disney sometimes adds additional shows and entertainment to give the huddled masses more things to do.

Like last year, Disney brought back the Comedy Warehouse. Originally the Comedy Warehouse was a permanent club in the Pleasure Island section of Disney Springs that held improvisational comedy acts every night. While the show at Hollywood Studios borrows the name and the same improv style from Pleasure Island, the show at the Studios is very temporary – running for only 14 days around the period between Christmas and New Years.

The show takes place in the Premier Theater, a venue that holds 800 people and is located in the Streets Of America section of the park. It is located nearby the Muppet Vision 3D attraction. The Premier Theater is a huge and well-appointed venue, but it isn’t open to the public very often.

How The Comedy Warehouse Show Works

The show follows a typical improv comedy approach. During the show, the performers ask the audience for suggestions and then create songs, jokes, and stories on-the-fly using this information. Unlike many other Disney entertainment offerings, this one is definitely not scripted. And unlike many other comedy clubs, this one definitely is very family friendly. It also takes a queue from the Christmas holidays, with much of the content focused on holiday themes.

Because improv comedy is off-the-cuff, you never know what you are going to get. It is a form of comedy that requires the performers to think very quickly and very creatively – which I am sure is an incredible challenge, and much harder than it looks. Have you ever composed and sang a song about a subject you’ve never really considered, and done it on-the-fly in front of a live audience? That’s hard.

But with that said, I found the show to be a bit entertaining, but not a home run. Living in Orlando, I’ve visited SAK Comedy Lab many times. SAK is a family-friendly improv comedy venue in downtown Orlando. The shows at SAK often get me laughing so hard that I’m in tears.

But that didn’t happen at the Comedy Warehouse. Maybe it was an off performance, or maybe the performers were a bit rusty from their old Pleasure Island days.

I did enjoy the show. But if what I saw was typical, and if you are in the mood for great improvisational comedy in Orlando, I would suggest trying SAK instead of the Comedy Warehouse.

Let’s look at some photos and a video of the performance.

What do you think about the Comedy Warehouse show?