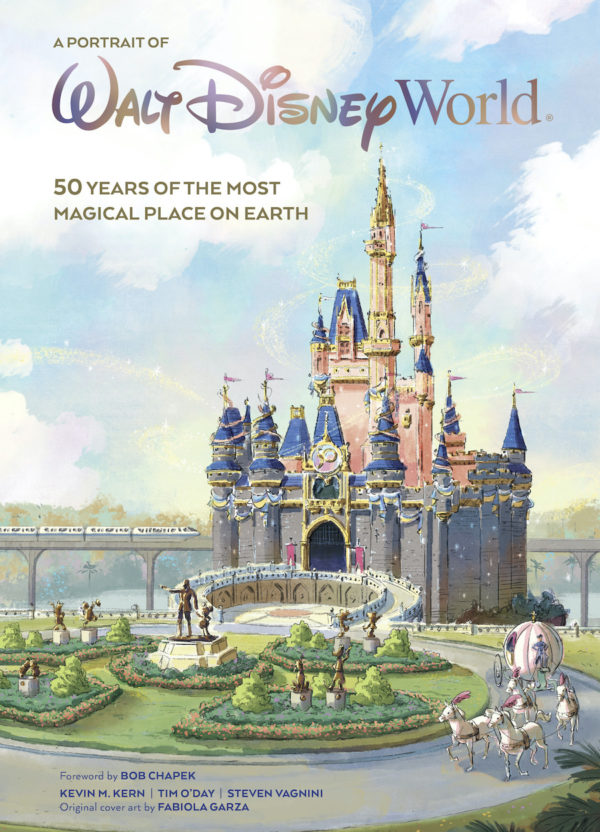 Walt Disney World’s 50th Anniversary is right around the corner! In just a few short months, a party unlike any other will take place for well over a year. New shows, daily celebrations, new attractions, and limited edition 50th anniversary merchandise…a lot of it.

The first major release of the 50th branded merchandise has just been announced through Disney Books and the Disney Parks Blog. The two arms of the company released a sneak peek of a new series of books that all commemorate WDW’s golden anniversary.

Let’s take a look at the sneak peek:

“Attention, foodies! Bring home the magic (and food) of Walt Disney World with the newest title in the Delicious Disney lineup! With beautiful photos and behind-the-scenes anecdotes told by authors Marcy Carriker Smothers and Pam Brandon, this cookbook-meets-coffee-table-book enchants with more than sixty recipes ranging from appetizers to desserts, main courses and libations. Disney foodie fans will love this collection of stories and recipes that goes all the way back to opening day in 1971, to current favorites from around the resort. This book will be exclusively available at Walt Disney World Resort and shopDisney beginning September 28th.”

Art of Coloring: Walt Disney World: 100 Images to Inspire Creativity from The Most Magical Place on Earth

“You’re never too old to experience the joy of coloring, right? Well, for the creative spirit, this brand new adult coloring book is ideal for taking pencil to paper and adding your own brand of color and style. Get your colored pencils ready! This book will be exclusively available at Walt Disney World Resort and shopDisney beginning September 28th.”

“Walt Disney World will always be growing and evolving, just as Walt intended it. To keep up to date, you can trust Birnbaum as your 2021-2022 guide for insider tips on how to see and do it all! Get the scoop on what’s new for the 50th Anniversary, including insider updates on new attractions, resorts, and more. Available wherever books are sold beginning September 21st.”

“Kids think they are the experts on all things Disney… and they might just be right! In this book, real kids give honest advice for the most awesome Walt Disney World Resort vacation possible, including insider tips for young readers, must-do attraction and dining recommendations, and a hunt for dozens of Hidden Mickeys throughout the theme parks! Available wherever books are sold beginning September 21st.”

Birnbaum’s 2022 Walt Disney World for Kids: The Official Guide is available on Amazon.