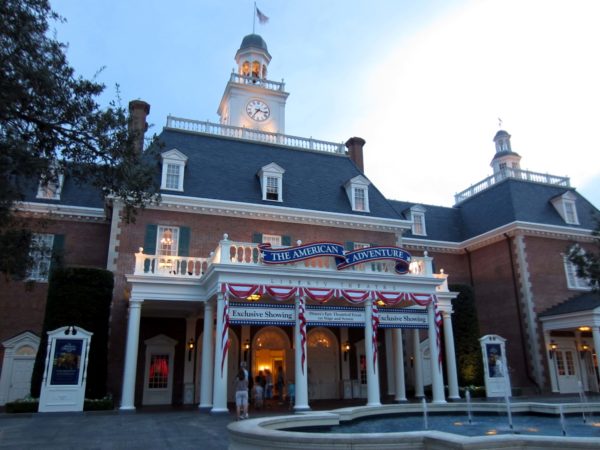 Looking up at The American Adventure building at dusk

Disney announced on April 13th, 2017, that they would be opening Club 33 locations in each of the Disney World Theme Parks by Fall 2017. That deadline was obviously missed, but the first opening is likely just a few days away!

Disney’s Hollywood Studios‘ former Catwalk Bar, located behind the Hollywood Brown Derby, will become the park’s Club 33 lounge. The doorbell/intercom was installed just a few days ago, and the first guests will arrive very soon.

Coincidentally, all of the first guests are reportedly from Golden Oak, Disney’s private living community.

So what did these VIP residents have to do to join Club 33? Well, there’s a $33,000 joiners fee and a $15,000 annual membership fee. They’ll be welcomed with small bites and drinks, which will be Club 33’s menu in all four locations.

If you think that seems really pricey for a private lounge and some snacks, you’re right, but there are some more benefits to membership including:

Have you done the math? Based on the things that we can put an absolute value on, membership benefits include upwards of $32,500 in monetary value, and that doesn’t include the value of concierge services and unlimited FastPass+.

You read it right: Club 33 is a good value for your money.

If you have an extra $45,000 lying around, this is probably a pretty good investment –  especially if you live near Disney World, can/do visit frequently, and invite friends and family to go with you regularly.

If the Club 33 name sounds familiar, you might be a true Disney Fan!

The private lounge actually dates back to Walt Disney himself. While he was working on the 1964 World’s Fair, he decided that he needed private lounges for the corporate elite in his Disneyland Park. He originally intended it to only be for this use, but when it opened on June 15th, 1967, shortly after his death, individual memberships became an option.

The name Club “33” is said to come from the 33 corporate sponsors who supported Disney in his early career in his parks and at the World’s Fair.

Club 33 still exists in Disneyland, but it’s much more prestigious. Members in Disneyland also have access to the Disney parks on both coasts and all of the benefits listed above, but they also get early park admission, which a WDW member could theoretically request as part of their “private concierge service.”

However, Disneyland members pay a $40,000 initial fee and $25,000 annually plus annual dues of $10,000. That’s quite a bit more than in Disney World, but people are literally lining up to join! The waiting list is reportedly 14 years long for new memberships!

Will you join Club 33? Will you invite me to lunch with you at the Club?  🙂