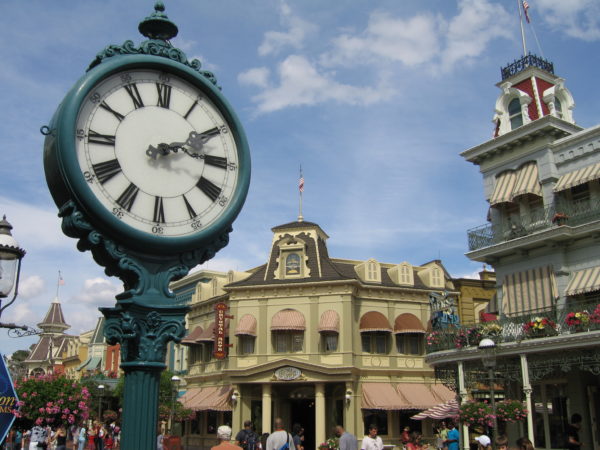 Many people try to avoid watching the clock while on vacation, but if you’re one to keep time, Disney has a new official partner for you!

Citizen recently became the official timepiece of Disney World, Disneyland, and Marvel New Media’s Creative Space. Citizen is recognized for creating precision timekeeping instruments since 1918, and Disney appreciates its rich history of creativity and dedication to exquisite craftsmanship, for which Disney is also known.

There are some changes coming to reflect this new partnership. Let’s take a look!

The Citizen logo will appear on all of the clocks on Main Street USA in Disney World’s Magic Kingdom and in Disneyland. These clocks sit high atop tall poles and can be seen from almost anywhere on Main Street. They are reminiscent of clocks in old-time towns all around the country, and many of them can still be seen today.

The logo will also appear on some FastPass+ clocks that display return times for FP+ reservations.

Citizen will create special timepieces including a variety of watches, mantel clocks, and wall clocks with unique designs for each of the Disney parks.

This long-term promotional alliance means that Citizen will have licensing rights to Disney artwork like characters and movie logos and will create merchandise bearing these likenesses.

As Disney’s official timepiece, Citizen also has the responsibility of being the official timekeeper for all runDisney events. Its logo will appear on race clocks at the beginning and end of the races, and finish times will be calculated with Citizen timepieces.

Citizen’s partnership with Disney also means a partnership with Disney’s conglomerates including Marvel since Disney recently acquired Marvel. As such, Citizen will sponsor the red carpet at Marvel’s release of Avengers: Infinity War coming later this month- April 2018. They’ll also appear beside Marvel at the San Diego Comic-Con, the largest comic book convention in the world.

Citizen will also sponsor other Disney affiliated events including the Disney Dreamers Academy, which allows young people with exceptional skills and talents to accomplish dreams that they couldn’t otherwise accomplish on their own.

This partnership also gives Citizen worldwide music licensing rights to Disney’s entire repertoire. They could use this in advertising and even in timepieces as alarms and alerts.