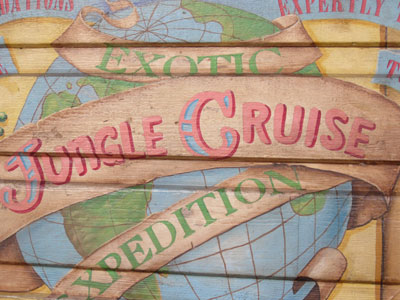 The Disney Parks Blog has announced that, beginning in early November, both the Disneyland and the Walt Disney World versions of the classic Jungle Cruise attraction will get a holiday-themed overlay.

Before we get into the changes that are coming to the Jungle Cruise, let’s look at some Disney history and the concept of an “overlay,” or a temporary change to the look and feel an attraction.

While this is a first for the Jungle Cruise to get a Christmas overlay theme on both the east coast and west coasts, the idea of Disney adding seasonal Christmas themes to existing attractions is a tried and true tradition at Disneyland.

There is no Haunted Mansion Christmas overlay at Walt Disney World.

Started back in 1997, Disneyland also seasonally updates their version of the It’s A Small World attraction by adding Christmas decorations, and adding in the singing of Jingle Bells and Deck the Halls in addition to the usual theme song. This seasonal update is called “It’s a Small World Holiday.” Disneyland Paris, Tokyo Disneyland, and Hong Kong Disneyland also have Christmas overlays for their editions of this timeless attraction, to varying degrees.

There is no “It’s A Small World” Christmas overlay at Walt Disney World.

For a time, Disneyland created the Country Bear Christmas Special each year, but that stopped in 2001.

There is no Country Bear Christmas overlay at Walt Disney World (although there was for a time, from 1984 – 2005).

As you can see, Disneyland gets several overlays for Christmas each year, and Walt Disney World doesn’t.

It’s probably because the primary visitors to Disneyland are locals. Disney has to make changes to keep them coming back. In addition, shutting down these attractions for several weeks before and after the Christmas season isn’t too big a deal when most people who come to the Disneyland parks have been there before.

At Walt Disney World, visitors regularly come from all over the world. Disney management doesn’t really need to change up the attractions since so many people see them for the first time each year.

It’s important to note that the folks in charge at Disney World aren’t Scrooges. Disney goes all out to decorate all the parks for Christmastime. They also add the amazing Osborne Family Spectacle of Dancing Lights to the Streets of America section of Disney’s Hollywood Studios. They just don’t generally overlay attractions.

The new seasonal storyline for the Jungle Cruise will explain how the attraction’s skippers, who are well known for their comedy routines, have become homesick. To help cheer things up, they have added decorations to the queue and boathouse. They’ve renamed the boats with holiday-themed names, and will be telling new jokes.

This will be the first and only Christmas overlay operating at the Magic Kingdom this year.