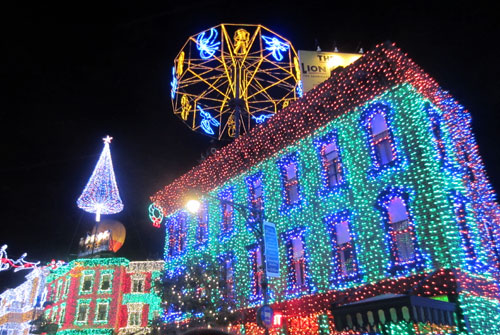 If you choose to visit Disney World between Christmas and New Year’s Day, you will encounter some of the largest crowds and the highest prices of the year. However, you also have the chance to enjoy many special Christmas experiences and beautiful decorations.

In addition, Disney offers many of the special Christmastime experiences in late November and throughout December, so it is possible to enjoy these special treats without the big crowds.

Throughout all of the Disney parks you can expect to see spectacular Christmas decorations. From huge, themed Christmas trees at every park to uniquely themed garland and wreathes, Disney goes all out to prepare the parks for Christmas.

In addition to the decorations, each park and many of the resort hotels have special events and shows.

Let’s take a look at what you can find all around Disney World at Christmastime:

Disney does an amazing job of decorating Main Street USA.  The entire street glows with beautiful decorations and lights.

For many families, this party has become a tradition that welcomes in the Christmas season. Mickey’s Very Merry Christmas Party is a hard ticket event at the Magic Kingdom, which means that you need to pay for a special admission that is separate and different from the usual admission to the park. The party usually begins around 7 pm and takes place on select nights from early-November through mid-December. The party offers lower crowds and many special treats like free cookies and hot chocolate, a special Christmas parade and fireworks presentation, and plenty of Disney characters who are happy to give out autographs and hugs.

Out with the old and in with the new. In the past, the Fairy Godmother from Cinderella had the honor of turning on the Castle Dream Lights each evening. Now, “Frozen” has taken over, and Anna, Elsa, Kristoph, and Olaf take the stage to fire up the Christmas lights.

Epcot features decorations throughout the park, including famous Christmas-themed topiaries near the entrance in Future World. There are also plenty of special shows.

Holidays Around the World

It’s really interesting to see how countries around the world celebrate Christmas. From Father Christmas in the United Kingdom to Père Noël in France, a walk around the Epcot World Showcase Lagoon will help you learn, experience, and enjoy Christmas traditions from around the world.

This popular yearly event includes celebrity narrators who retell the Christmas story together with a huge orchestra and choir. The presentation is moving and impressive. It’s a great way to remember the true meaning behind Christmas.

Joyful! A Gospel Celebration of the Season

If you enjoy gospel music or just high-energy presentations, be sure to stop by the temporary stage set up in Future World not far from Spaceship Earth to enjoy a show called “Joyful!” A group of extremely talented gospel singers share upbeat and fun arrangements of Christmas songs and church hymns.

I’m a big fan of the look and feel of Disney’s Hollywood Studios. At Christmastime, the decorations make the 1940’s come to life with special sparkle and dazzle.

Speaking of dazzle, make sure that you take the time to check out the Osborne Family Spectacle of Dancing Lights in the Streets of America section of Hollywood Studios. You will literally be surrounded with an unbelievable display of Christmas lights. It takes 20,000 man hours to install the lights which include strings of lights that, if laid out end-to-end, would stretch for more than 10 miles!

Talented Disney Cast Members who know improv comedy put on a family-friendly show based on suggestions from the audience.  They turn these suggestions into funny scenes on-the-fly.  It’s amazing!

While you can expect some level of Christmas decorations at all the Disney resort hotels, several of the Deluxe Resorts create truly incredible displays. You can see an entire gingerbread house in the lobby of Disney’s Grand Floridian Resort as well as a huge gingerbread scene at Disney’s Contemporary Resort.

No matter where and how you spend your time in Disney during the Christmas season, the happiest place on Earth is truly at its best during the most wonderful time of the year.

Do you like the Christmas decorations at Walt Disney World?