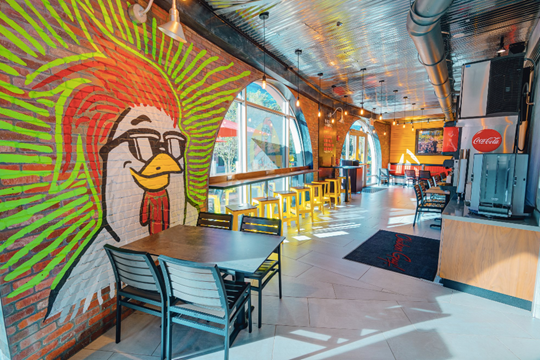 Have you been inside Chicken Guy! At Disney Springs? If so, beyond the delicious food, you’ve no doubt noticed the edgy, industrial design that covers the walls.

This cool design reflects the inspiration for the restaurant: Guy Fieri’s personality. Celebrity Chef Guy Fieri owns the restaurant along with restaurateur Robert Earl, but neither one of them actually created the interior graphic design.

In fact, Architecture Plus International, Inc. (AP(+)) can be credited for that, and credited they were! On June 26th, 2019, AP+ won the Gold award for Fast Casual Restaurant in the Graphics division. The award comes from The Shop! Association during their Annual Store Design Global Shop Conference in Chicago.

This award is given to a restaurant that excels in retail design and recognizes originality in the use of space and materials. Chicken Guy!’s cool half-crescent design is both eye-catching and complementary to the overall design of the area, and the rough brick walls and corrugated tin ceilings add visual interest. As if that weren’t enough, other media like colorful graphics in an illustration style are also mixed in on the walls.

The Disney Springs location is the first of its kind, but Fieri and Earl aren’t stopping here. They plan to open more of the same across the country with a Miami location already underway in Aventura Mall expected to open later this summer.

Are you a fan of Chicken Guy! at Disney Springs?