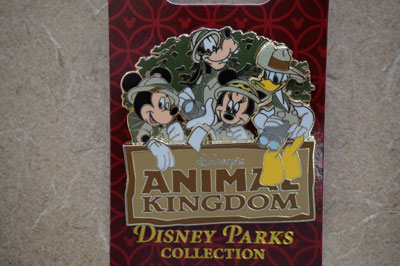 There are few areas at Disney World that create more opinions, and stronger opinions, than Dinoland USA.

Do you think Dinoland USA is tacky?

Do you think Dinoland USA is un-Disney-like?

Do you think Dinoland USA is low quality?

You might be surprised to learn that, personally, I would answer “yes” to the first question, but a definite “no” to the second and third. I actually like Dinoland USA.  Really.  I think Disney put a great deal of thought into it.

Before you throw a rotten tomato at your screen, let me explain my thinking.

Would you like to win an Animal Kingdom Disney Trading Pin?
Check out the entry instructions at the end of this article.

In Defense of Dinoland USA

Dinoland has a terrific back story.

Somewhere in a remote area in the 1940s, Chester & Hester were a married couple who owned a gas station. Since the area wasn’t well-traveled, they didn’t earn much money.

Then something amazing happened.

Fossil-hunters found dinosaur bones nearby. Word got out and scientists came to look for more bones. When time travel was invented in the 1970s, The Dino Institute built a research facility nearby. The Institute offered tours to earn money, and Chester & Hester saw an opportunity.

Chester & Hester upgraded their old gas station into Chester and Hester’s Dinosaur Treasures. They started to sell dinosaur-themed souvenirs. They created signs to bring in the crowds. People started to come.

Next, they opened their own tourist trap:  an amusement park across the street from the old gas station.  That is now Chester & Hester’s Dino-Rama was born.

Isn’t that a fun story? Doesn’t it nicely explain why we have Dinoland USA near the Dino Institute (home of the somewhat-scary Dinosaur ride)?

Interestingly, the story seems to work on another level too: When Disneyland was first built, all kinds of tacky mom-and-pop attractions sprung up to feed off Disney’s success. Just like Dino-Rama feeds off of the Dino Institute.

So the next time you are in Disney’s Animal Kingdom, you can impress your friends by sharing this backstory with your friends.

Now that you are a fan of Dinoland USA (or at least intellectually appreciate it a bit more), let’s take a tour of Chester & Hester’s first shop: Dinosaur Treasures.

Dinosaur Treasures has some amazing theming and details. Everywhere you look, there are kitschy dinosaur references. All over the walls and in the ceiling, you see dino memorabilia as well as references to the original gas station.

Would you like to win a Disney’s Animal Kingdom trading pin? Just send an e-mail to me at [Contest is over – Congratulations to the winner, Jeff from North Carolina!] I’ll add you to our mailing list (if you aren’t already on it) and enter you into a drawing. I’ll then select a lucky winner on or around April 18, 2014. I’ll request your mailing address, and then send a prize to you. It’s that easy!

Please note you need to send an e-mail in if you would like to win this particular prize even if you are on our newsletter mailing list or if you have entered other drawings in the past.

Would you like to win an Animal Kingdom trading pin?