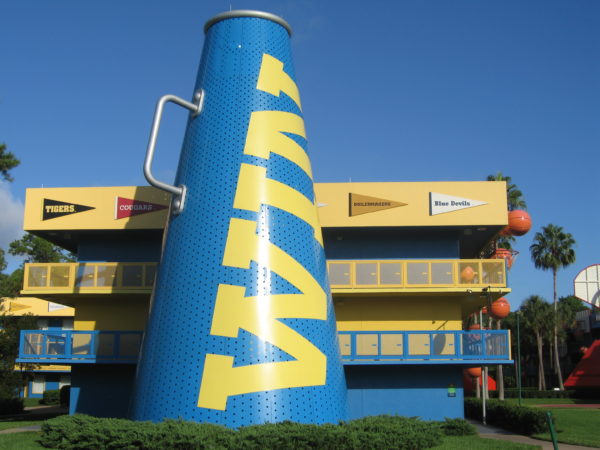 If cheer or dance has ever been a part of your life, you know that this is a true statement. Perhaps you were a cheerleader or on a dance team or you have a daughter or niece who participates. Either way, you know that cheer and dance can be all consuming. With practices, warm-ups, strength training, conditioning, games, and competitions, cheerleaders and dancers can have very full schedules whether they compete or not.

I grew up cheering and dancing, and I loved every minute of it. Back then, competitive cheerleading wasn’t as big as it is now. I still love going to local football games and watching the cheerleaders or catching a competition on television all these years later, but hundreds of cheerleaders in one place at one time can be a little overwhelming even for fans.

When my husband and I went to Disney World on our honeymoon several (eek!) years ago, we noticed that there were a ton of cheerleaders- and they were everywhere! Sure, we knew going to Disney World that there would be lots of kids, but we didn’t expect hundreds of young girls and their families.

As I said, I still love cheering; it gave me some of my greatest memories (so please don’t write me nasty letters after reading my next statement). However, I don’t exactly want to go on vacation with all of the squads in the country or even the world at once.

If you agree with me, this article is for you. I’m going to explain six ways cheer and dance competitions can affect your Disney World Vacation.

Competitions typically take place from early December through early May.

Pop Warner Week is a big weekend for the little leagues. Hundreds of boys and girls from 64 football teams and 400 cheer squads come to compete in the Pop Warner Superbowl and the National Cheer and Dance Championships.

Competitions are normally held on the weekends or toward the end of the week since most of the girls are students in some capacity. This means they’ll arrive a day or two before competition and leave a day or two after competition.

All competitions are held at the ESPN Wide World Of Sports, which is working on expanding its complex to include a 300,000 square foot arena with 8,000 seats. They used to be held in the parks with the Indiana Jones Stunt Show Theater the most common place until they were moved. The whole attraction was shut down when we were there, but they don’t use this area anymore, so you won’t experience that inconvenience.

This complex also hosts other sports like track and field, football, baseball, and potentially eSports in the future. However, these things will probably not take place simultaneously, though they can once the space is expanded.

This does not mean that ESPN Wide World of Sports is shut down. It is still open to the public and you’re welcome to come watch the cheer and dance competitions if you want to.

Most teams, which consist of around 25 athletes each, require their cheerleaders to stay at the same hotel because they will often hold practices at the hotel. They will stay on property at one of the Disney resort hotels, on property at one of the hotels not owned and operated by Disney, or off property. It’s not unusual for them to practice stunting and routines in the common areas of the hotels, so you may see and hear cheers, music, and the familiar eight-count. Fortunately, most hotels are so large that you either won’t be affected or you can move to another location within the resort if it bothers you.

If your reservation for one of these hotels happens to coincide with a cheer and dance competition, don’t be surprised if Disney moves your reservation. It’s not uncommon for teams to book out an entire resort. If this happens, Disney will make sure that your alternative accommodations are as good or better than what you reserved.

The cheerleaders who come to Disney World to compete are there to compete and, more importantly, to win. Many coaches are very strict when it comes to the competition. They’ve worked hard to get to where they are; it’s not something you just sign up for.

That being said, once the competition is over or they don’t make it to the next round, the teams are free to frequent the parks. For the Worlds Championship, Disney’s Hollywood Studios shuts down for an annual cheerleader’s block party. If you’re in Disney World during this time, you will not be able to access The Studios on this night unless you are affiliated with the cheer squads.

Besides that, you should see little to no impact on the parks. The lines may be a little longer, but it’s not something that will greatly affect your vacation.

Cheerleaders are some of the hardest working athletes you’ll ever meet. Cheering is a sport. Don’t argue with me; you won’t win.

As such, they work up some huge appetites after long practices and lots of adrenaline after competitions. They will eat anywhere and anything they can. The ESPN Wide World of Sports Grill is a popular one because it’s on site of the competition. Restaurants at Disney Springs will also be very busy pretty much all day long but especially at night after competitions are over for the day.

Cheerleaders are required to purchase a park hopper ticket so they can take the bus and travel between parks and to ESPN Wide World of Sports. Probably the biggest impact you’ll experience will be on the buses.

Since they don’t normally spring for the Deluxe Resort Hotels, monorail lines and ferries aren’t usually as packed as buses.

You should also know that these cheerleaders travel in packs. You’ll hardly ever see just one; where there’s one, there’s usually 20 or so. Therefore, if they’re in line for a bus, it’s going to be full. This is what we experienced most on our vacation, but Disney knows this and plans for it, so there will be extra buses available to accommodate the crowds.

Have you visited Disney World during a cheer or dance competition?