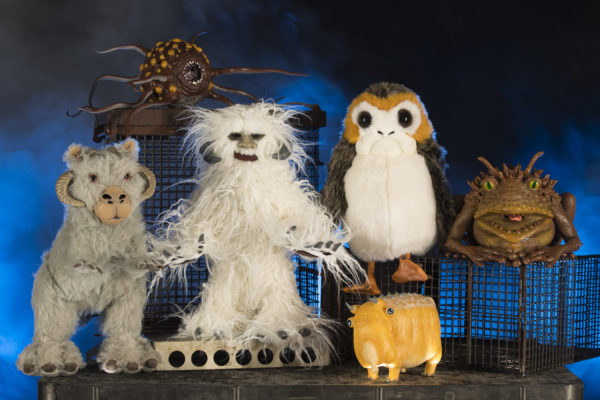 Guests visiting the Creature Stall in Star Wars: Galaxy's Edge at Disneyland Park in Anaheim, California and at Disney's Hollywood Studios in Lake Buena Vista, Florida will discover creatures of the galaxy ready for a home, including porgs, tauntauns and more. (David Roark/Disney Parks)

Star Wars introduced us to some of the most iconic characters we’ve ever seen. These characters have become beloved and hated in our culture whether you’re a fan of the movies or not.

However, with eight episodic movies and three spinoffs already out and more on the way, it’s hard to keep all of the characters straight!

Today, as Star Wars: Galaxy’s Edge has now been open for a few months in Disney World and Disneyland, I thought we’d take a look at some of the characters we can see in Galaxy’s Edge.

Kylo Ren is the Supreme Leader of the First Order. He appears several times daily, usually with Storm Troopers, at the First Order encampment at Docking Bay 9. Kylo Ren can be seen marching through Black Spire Outpost in search of the Resistance with the goal of destroying it.

Zabaka is the owner of Toydarian Toymaker. She is part of the flying alien species who sells quality toys and maintains a good relationship with the other proprietors. She is never actually seen, but you might catch a view of her silhouette through the workshop window.

Vi Moradi, who appeared in the grand opening ceremony as a Resistance spy to distract Kylo Ren from Chewbacca, always keeps tabs on the First Order. She’ll make sure that you know that the Resistance is gaining strength, and she’s willing to teach you some of her tricks. Her strength and wit always keep her one step ahead of the First Order.

Chewbacca is perhaps one of the most recognizable and beloved characters in the Star Wars franchise. He is the capable companion and co-pilot for Han Solo on the Millennium Falcon, and now he’s arrived on Batuu seeking help to fix the broken ship. He makes a deal with Hondo Ohnaka to get these parts. Chewie can be seen around Black Spire Outpost or outside of the Resistance Encampment in the ancient ruins of Batuu.

If Chewie is a beloved character, the Storm Troopers are infamous. They are the muscle of the First Order, and they can be seen patrolling with Kylo Ren. They might even snap orders at you or question you about your knowledge regarding the Resistance.

Dok-Ondar, the owner of Dok-Ondar’s Den of Antiquities, is a larger-than-life collector of things. He buys, sells, and trades valuable items and is known as the gatekeeper of the black market. As such, the locals know not to mess with him. You can see him in his shop taking inventory and barking orders at his assistants.

Oga Garra is a mysterious owner of Oga’s Cantina. Oga is never seen but often heard yelling at her servers. She is also the Blutopian Crime Boss, and this position has her involved in everything that happens in Batuu.

The Gatherers are experts at building lightsabers, and they want to pass their knowledge on to you inside of Savi’s workshop. They are trained in The Force and aim to help Jedi-hopefuls learn their ways.

Hondo Ohnaka is a Weequay pirate turned legitimate businessman, though if we’re being honest, he’s little more than a smuggler looking for the next big score. In fact, he offered audience members “the deal of a lifetime” during the grand opening ceremony.

He founded Ohnaka Transport Solutions, which operates out of the Black Spire Outpost. He has the Millennium Falcon on loan, and in exchange, he has offered to help Chewie get the parts he needs to fix the broken ship.

Cast Members in Galaxy’s Edge haven’t appeared in any movies, but they are just as much a part of the story as the Star Wars characters. They are the local citizens of Batuu, and they are encouraged to develop their own identities and personas as it fits with their job and interact with guests accordingly.

The Imagineers spent three years developing their costumes, which are created to be modular. This means that Cast Members, given a base costume, can complement their look with tunics, wraps, vests, necklaces, scarves, hats, and more. Even their names are translated into Aurebesh on their name tags. Cast members are essential to the immersive nature of the land.

You can spot a Convor, one of the most popular pets in the galaxy, in the Creature Stall. These owl-like birds with gold and brown plumes were first seen in Star Wars: The Clone Wars television series.

The Puffer Pig, pictured below on the lower right corner, can also be found in the Creature Stall. This mammal is adept at sniffing out valuable minerals and is thus vital to smugglers. This creature, which was first seen in the Star Wars Rebels animated series, inflates to massive proportions when frightened.

You can get your very own Puffer Pig plush in the Creature Stall, but you can also see its eyes and hear its grunts and snorts in this marketplace!

The Profrogg is a large rodent that forms complex underground burrow systems. It has horns, a snout, and sharp incisors plus powerful claws for defense and digging. You can spot a taxidermic version in Dok Ondar’s Den of Antiquities.

A Worrt is a carnivorous amphibian living in the sand dunes of Tatooine. Worrts wait for unsuspecting rodents and insects to pass by then snatches them up with their long tongues.

In Batuu, you can see one alive in a tank inside Oga’s Cantina. They can also be seen in the Creature Stall.

Wampas are large, white, furry carnivores from the ice planet, Hoth. These formidable predators from The Empire Strikes Back sneak up on prey and attacks. You can see a taxidermic Wampa in Dok Ondar’s Den of Antiquities and plush ones at the Creature Stall.

The Dokma, from the Star Wars Rebels animated television series, have two eyestalks and a protective shell. They are small and timid. You can see them and even adopt one at the Creature Stall.

Dianogas are large, slimy, ocotopus-like carnivores from Star Wars: A New Hope. In this movie, a dianoga attacked Luke Skywalker in a Death Star trash compactor, and in Batuu, you can see the eye of a dianoga in a water fountain! His name is Tiny, but don’t be fooled: he’s anything by tiny! You can also spot a juvenile dianoga named Toothy in a tank at Dok Ondar’s Den of Antiquities.

Felucian Fireflies are like extra-terrestrial lightning bugs! These glowing creatures are native to the colorful, humid jungle of the planet Felucia. They were first seen in The Revenge of the Sith and can be seen at Dok Ondar’s Den of Antiquities.

Loth-cats, as the name suggests, are cute felines who hunt small rodents on the grassy plains of Lothal. You can see one of these lively creatures, who first appeared in the Star Wars Rebels television series, inside the Creature Stall. It’s sleeping in a cage wagging its tail.

In Batuu, you can occasionally hear their iconic high-pitched laugh and see one’s tail hanging from a cage in the Creature Stall.

Momongs are primates from The Clone Wars animated series. You can see the tail of a momong hanging from a cage in the Creature Stall.

Mynocks are bat-like parasites. They appeared in Star Wars: The Empire Strikes back and are known for chewing on power cables and energy conductors of starships.

In Batuu, you can see these “beastly things” pickled in a tank in Oga’s Cantina.

The Ollopom is a short, gentle rodent but looks like plant. They live in the Gungan Swamps of Naboo and can be seen in Dok Ondar’s Den of Antiquities in Star Wars: Galaxy’s Edge.

Sarlaccs are dangerous carnivores that can grow up to 100 meters long. They are known to bury themselves in sand leaving on its mouth exposed. They first appeared in Return of the Jedi. You can see an infant in a special tank in Dok Ondar’s Den of Antiquities that simulates an arid atmosphere.

Swamp Slugs are native to the bogs of Dagobah from The Empire Strikes Back. They have thousands of teeth that they used to grind up plants and animals (but not droids). There’s a Swamp Slug in a tank in Oga’s Cantina.

Womp rats are pests native to Tatooine that grow up to two meters long. They first appeared in Star Wars: A New Hope. A taxidermic womp rat appears in Dok Ondar’s Den of Antiquities.

8D-J8 is a former smelter droid. His sole purpose is to turn meats on the spit cooked to perfection at Ronto Roasters. 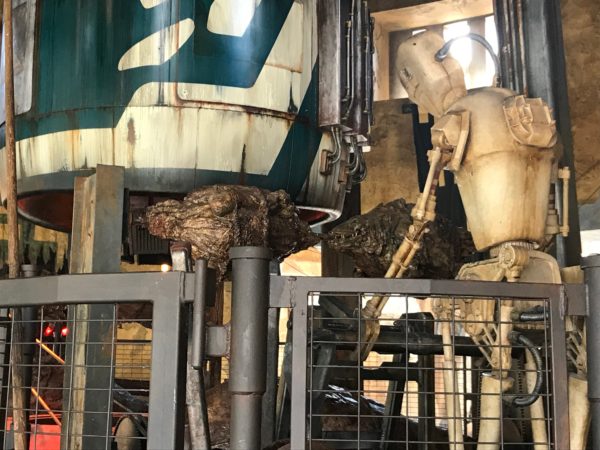 DJ R-3X or DJ Rex) crash-landed on Batuu and was reprogrammed by Mubo at the Droid Depot to be a DJ. He was soled to Oga to pay off a debt Mubo owed. He used to be a Star Tours pilot droid, and now he’s a DJ at Oga’s Cantina. He’s still just as chatty!

R5-P8 is a sassy automated repair mechanic and Hondo Ohnaka’s most capable astromech. You can spot him at the spaceport.

R2-D2 is an iconic droid from the Star Wars saga. In Batuu, he appears at the Droid Depot, and you can build your own. They make great friends!