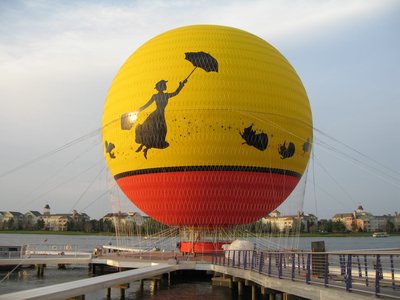 Back in July, the Disney Springs attraction called Characters In Flight closed. Characters In Flight is a tethered helium balloon ride. The reason for the shut down? The company that runs the attraction, called Aeorphile, also operates a similar balloon ride in Hong Kong. That ride in Hong Kong had an accident where a split in the balloon caused it to fall about 60 feet to the ground.

While there were no known issues in the balloon in Disney Springs, Aerophile voluntarily shut down the Disney ride to inspect it. Back at the time of the initial shut down, there was no official word on how long the ride would be down – or even if it would reopen at all. And given the limited number of operating shops and attractions in the old Pleasure Island section of Disney Springs, this attraction was missed.

The Balloon Is Back

It is hard to tell if the graphics in the main body of the balloon are really gone, or just on the back side of the balloon.  However, there are now more colorful graphics that appear near the bottom of the balloon that definitely were not there before.

On Saturday I saw the balloon in the air, but I’m not sure if it was up for testing or for rides.